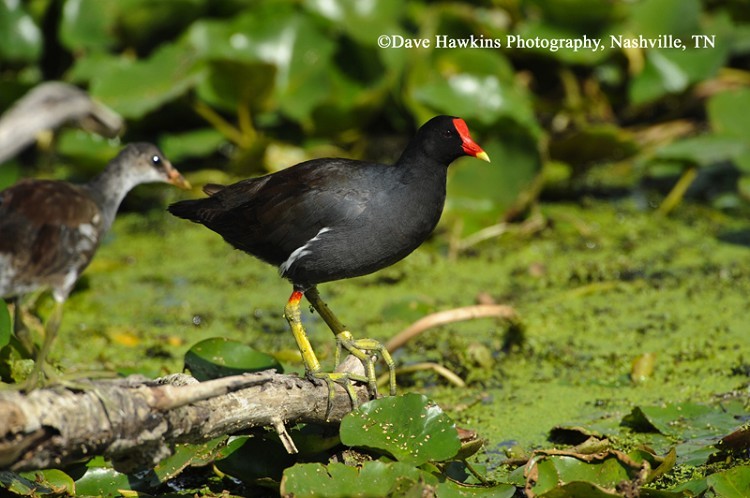 The Common Gallinule is the size of a duck and swims like a duck, but is in fact, a rail.  It is readily distinguished from all ducks by the blunt red and yellow bill and red forehead shield.

It breeds in fresh and brackish water marshes in scattered locations across eastern and southwestern North America, and southward to Chile.  It is also found from northern Europe to southern Africa, and across Asia to the Pacific.  In North America, it winters from coastal North Carolina to Mexico, and in scattered locations in the southwestern United States.

The Common Gallinule is rare but regular in Tennessee during migration and during the breeding season, and is normally present in the state from late April to late September.

Description: Superficially, the Common Gallinule looks like a duck, but has a triangular shaped bill.  This bill is red and yellow, and has a red shield on the forehead from February-September, when it is most likely to be found in Tennessee.  The body is dark with a horizontal white stripe on the side, and white undertail coverts with a dark center stripe.

The male and female look the same. Juvenile birds (July to February) are paler brown with the horizontal white line on the body, a whitish throat, and dusky bill and legs.

Diet: Seeds of grasses and sedges, and some snails.

Nesting and reproduction: Like some other rail species, Common Gallinules will build "dummy" nests used during courtship and for brooding young after they leave the nest.

Incubation: Both parents incubate the eggs for about 3 weeks.

Fledging: Young leave the nest within 1 or 2 days of hatching, and are frequently brooded in a specially built nest, near the original nest.   Both adults care for the young until 21 to 25 days old.

Nest: Both adults build the platform nest of dead vegetation, and it is usually placed low in emergent aquatic vegetation near open water.

Status in Tennessee: The Common Gallinule is a rare migrant and summer resident, arriving in late April and most departing by late September. There are nest records from East, Middle, and West Tennessee.

Though little is known about population trends, it is considered a game species in the state, but is likely seldom taken by hunters. Ironically, it is also listed as In Need of Management by the State of Tennessee.

Best places to see in Tennessee: Reelfoot Lake may be the most likely place to see a Common Gallinule.