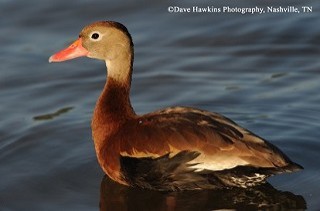 The Black-bellied Whistling-Duck is a distinctive-looking duck primarily found in Central and South America, but extending into southern Texas and Louisiana. It is a rare visitor in Tennessee and has recently been recorded breeding in the state! Its long neck and legs, black belly, and red bill make this an easy duck to identify.

Description: The Black-bellied Whistling-Duck is a medium-sized, brown dabbling duck with a long neck, long pink legs, black belly, and a red bill on a gray face. The large white wing-patch is diagnostic in flight, and males and females look similar.

Immature birds look like adults, but are more grayish brown with a mostly gray belly, and a gray bill and legs.

Similar Species: The Fulvous Whistling-Duck is similar in body shape but is buffy on the head, neck and belly, and has dark wings with no white wing-patch.

Nesting and reproduction: Nesting, though rare in Tennessee, begins in June with young hatching in mid-July.

Fledging: Young leave the nest shortly after hatching, but are unable to fly until they are approximately a month old.

Nest: Nests are placed in cavities, including nest boxes, but usually without a nest lining.

Status in Tennessee: Rare bird year-round in Tennessee, but more frequently reported in West Tennessee from late May through August.