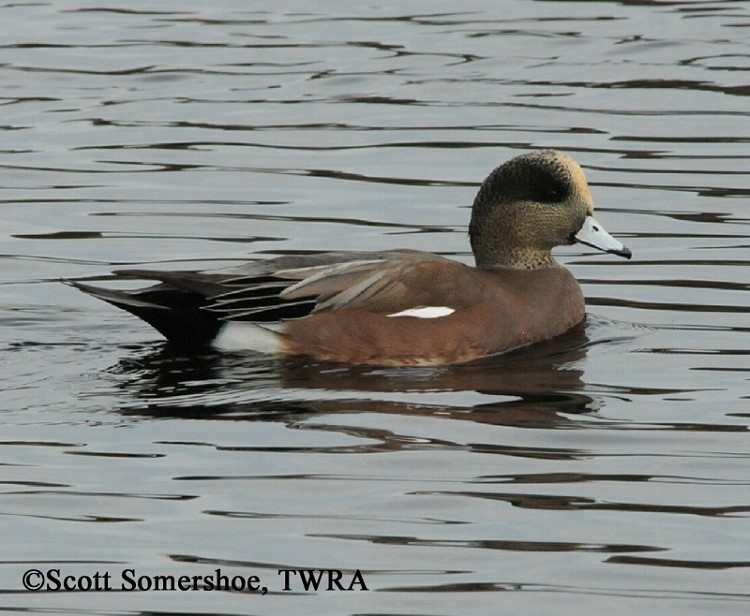 The American Wigeon was formerly called the Baldpate, because the white forehead of the male was said to resemble a man's baldhead. This white crown is conspicuous when these ducks are in mixed flocks in grain fields, marshes and shallow water.

The breeding range of the American Wigeon extends from the Bering Sea to Hudson Bay and from the northern tundra to the southern prairies. The greatest numbers winter on the Pacific coast, but it is also found in the southern United States southward to northern South America.

The American Wigeon is generally present in Tennessee from late September to early May.

Description: The forehead and top of the male’s head is white, and he has a dark green patch through the eye.

The female is dull gray and rusty brown overall. The bill of both the male and female is small and bluish-gray with a black tip. In flight, the male has a large white patch on the upper-wing; the female has a smaller patch. Both have white “armpits” on the under-wing.

Voice: The male has a high 2 or 3-syllable whistle, resembling a squeaky toy.

Habitat: In Tennessee they are found on shallow ponds, lakes, rivers and in grain fields or on mudflats.

Nesting and reproduction: The American Wigeon has never been known to nest in Tennessee.

Status in Tennessee: Fairly common migrant and winter resident arriving by late September and departing by early May.

Best places to see in Tennessee: Waterfowl refuges across the state.