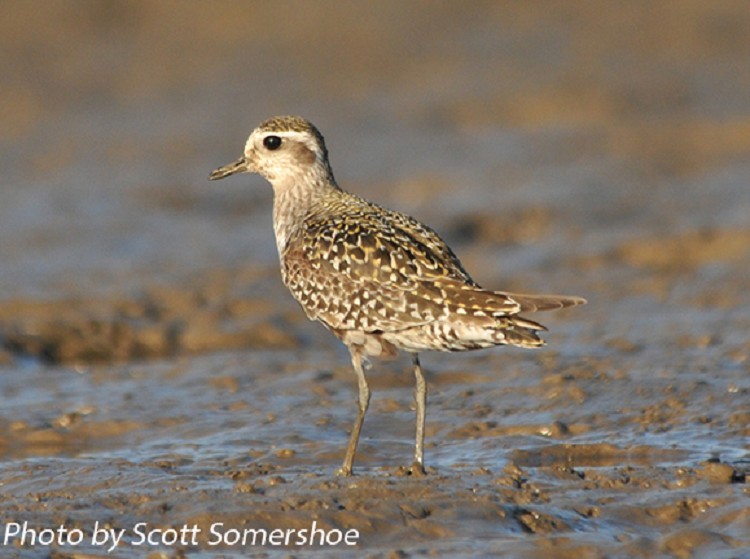 American Golden-Plovers nest across the American arctic from Baffin Island, Canada, to the eastern edge of Siberia. They winter in the grasslands of central and southern South America making their migration is one of the longest of any shorebird.

Their migration takes them through the eastern two-thirds of North America where they are more likely to stop in Tennessee on their way north than on their return trip in the fall.

Description: The face, neck, breast, and belly of the adult breeding male plumage is solid black.  A bright white stripe separates the black throat and face from the back and wings, which are golden colored with black barring.

The adult breeding female is similar to the male, but with less well-defined head and neck stripe, and more white in the black underparts. In spring, migrating birds may still be mostly in winter plumage and can appear gray.

Nonbreeding plumage is mostly gray with some mottling but no distinct patterns in the body plumage, though the stripe over the eye is bright. In fall migration, adults may retain partial or nearly full breeding plumage.

Nesting and reproduction: The American Golden-Plover has never been recorded nesting in Tennessee.

Status in Tennessee: Fairly common spring migrant found from as early as late February through May. They are much less common in fall, but occur from early July through November (rarely).

Large groups (>1200 birds) can be found in Tennessee in spring in appropriate habitat, whereas the similar Black-bellied Plover rarely occurs in groups over 10-15 individuals.

They can occur anywhere there is suitable open, short grass, plowed fields, mud flats, etc.  Abundance is lower in East Tennessee than in West and Middle Tennessee.