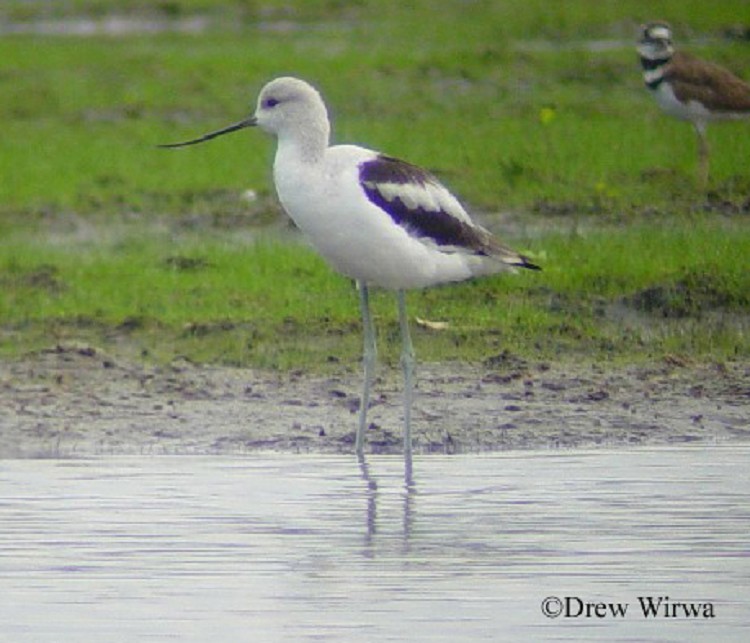 The American Avocet is a striking wading bird with long bluish legs and a long upcurved bill.  This is a western-breeding shorebird that is a rare migrant in Tennessee.

The breeding habitat includes marshes, beaches, shallow lakes and ponds in the mid-west and western states, and it winters along the southern Atlantic and Pacific coasts of the U.S. and Mexico.

The American Avocet is most likely to be present in Tennessee from mid-April to mid-May and again from mid-July to mid-November.

Description: This large, distinctive, long-legged shorebird has black-and-white upperparts, white underparts, and a noticeably upcurved bill. The head and neck are rusty colored in spring and gray in the fall, and the legs are grayish-blue year-round.

Males and females look similar, but males have a more strongly upcurved bill.

Voice: Much less vocal than the Black-necked Stilt. The call is typically a single note that varies from a high, sharp kweep to a lower pwik.

Similar Species: Black-necked Stilt is similar in size and habitat use, but has a straight bill, black on the back of the neck and top of the head, and red legs.

Diet: Aquatic invertebrates. Avocets often sweep their bill from side to side while foraging.

Nesting and reproduction: The American Avocet has not been documented nesting in Tennessee.

Status in Tennessee: Fairly rare migrant detected more often in Middle and East Tennessee than in West Tennessee. More likely found in fall than spring, typically between mid-April and mid-May and mid-July through mid-November.

Best places to see in Tennessee: American Avocets can appear in suitable habitat anywhere in the state, but have been regularly detected at Rankin Bottoms WMA, Snow Bunting Peninsula at Old Hickory Lake, and Pace Point at the Big Sandy Unit of Tennessee National Wildlife Refuge.