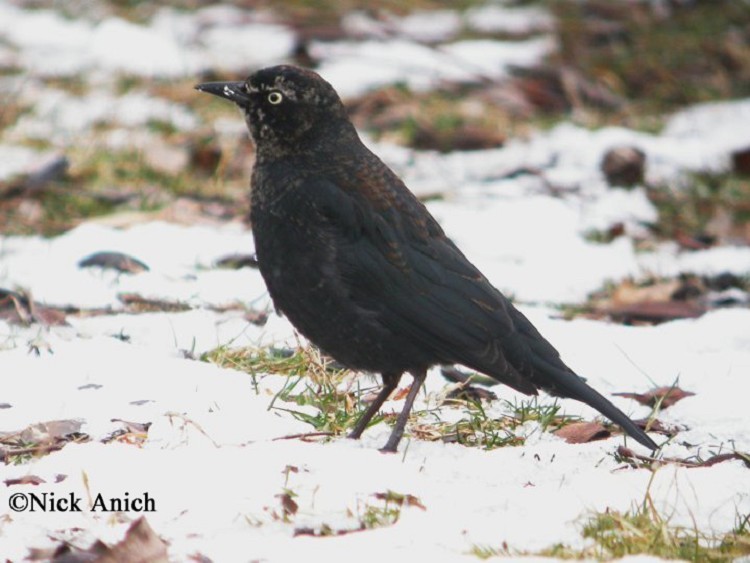 The Rusty Blackbird is likely the most rapidly declining bird in North America.   The reasons for this decline are poorly understand, and in 2005 the International Rusty Blackbird Technical Working Group was formed to address this lack of knowledge.

This species is an uncommon winter resident across Tennessee arriving in early November and departing by mid-April.   It is primarily found in wet woods, swamps and pastures, and regularly associates with other blackbird species in large winter flocks.  It breeds almost exclusively in the boreal forests of Alaska and Canada, and winters primarily in the southeastern United States.

Description: Breeding adult males (January-August) are uniformly black above with a greenish gloss; breeding females (March-August) are slate-gray, slightly paler below with blackish wings and tail.

Non-breeding males (August-March) have black feathers with rusty tips, especially on the face, nape and back; females are brownish with rusty feather tips, a gray rump, tawny eye-stripe and dark eye-patch. Both male and female have yellow eyes year round.

Diet: Mostly eat acorns and fruit during the winter, but sometimes frogs and insects.

Nesting and reproduction: The Rusty Blackbird has never been known to nest in Tennessee.

Status in Tennessee: Rusty Blackbirds are an uncommon migrant and winter resident across Tennessee, but are much more common in the western half of the state. They usually arrive in early November and depart by mid-May.

Best places to see in Tennessee: Rusty Blackbirds may be found in flooded or wet hardwood forests in the western half of the state from early November to mid-May. They are often found in flocks flipping over leaves looking for food. Specific sites include Meeman-Shelby Forest WMA, Chickasaw NWR, Reelfoot Lake, Cross Creeks NWR, among other locations.