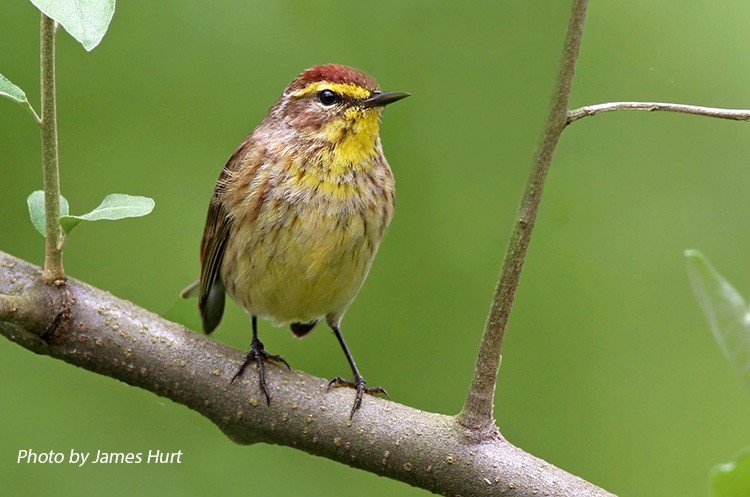 The Palm Warbler is a breeding bird of the bogs and fens in the boreal forests of Canada and the northern United States, and it winters in the southeastern and Gulf states and in the Caribbean. This bird was named from a specimen taken during the non-breeding season in Hispaniola. A better name for this species might be the "Wagging Warbler" because if its habitat of constantly bobbing its tail. This behavior plus the fact that this species forages on the ground more than most warblers makes this an easy species to identify. The Palm Warbler is a fairly common migrant across Tennessee and is present from mid-April to mid-May and then again from early October to mid-November.

Description: This small songbird has a brownish back, yellow to yellowish under-parts that are streaked on the sides, a chestnut cap, bright yellow under-tail coverts, and constantly wags its tail. Males and females look similar and both are duller in the non-breeding season.

Diet: Insects; some seeds and fruits in fall and winter.

Nesting and reproduction: The Palm Warbler has not been documented nesting in Tennessee.

Status in Tennessee: Fairly common migrant across the state and rare in winter.

Best places to see in Tennessee: Fairly common migrant across the state.