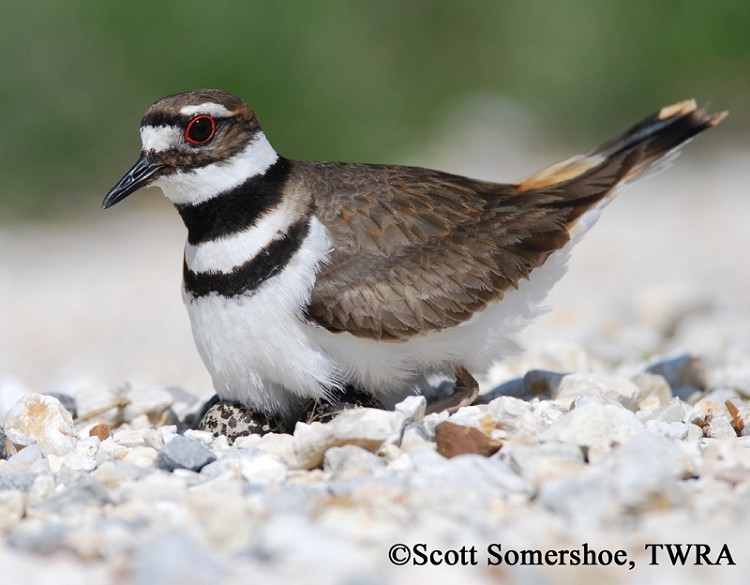 Killdeers are the most widespread and familiar shorebird in North America because they take advantage of man-altered habitats like gravel roads, athletic fields, lawns, as well as mudflats near water. They are easily identified by the two dark bands on their chest, and the kill-deer call they give even in flight and after dark.

The breeding range of the Killdeer extends across Alaska and Canada south to southern Mexico, and in winter from southern Alaska across the upper U.S. south to northern South America.

Killdeers are common year round residents in Tennessee.

Description: The Killdeer is a medium-sized shorebird that is brown above, white below with two conspicuous black bands across the chest, and a bright orange rump visible in flight. It has a round head, large eye, short neck, and moderately long legs.

Voice: The call is a loud, piercing kill-deer. The call is given during the day, but also at night.

Nesting and reproduction: In Tennessee, the Killdeer has one of the longest breeding seasons of any breeding bird in the state nesting from late winter to mid-summer, and often raises two broods in one season.

Incubation: Both adults incubate the eggs for 24 to 28 days. The male usually incubates at night.

Fledging: The young leave the nest within hours of hatching and are tended by both parents. They are independent at about 40 days.

Nest: The nest is a simple scrape on the ground made by the male in an open exposed area.

Status in Tennessee: The Killdeer is a common permanent resident across the state. The population appears to be increasing.

Best places to see in Tennessee: Killdeer can be found in a variety of open habitats across the state including pastures, recently plowed fields, lake and pond margins, gravel roads, parking lots, gravel rooftops, airports, and golf courses.