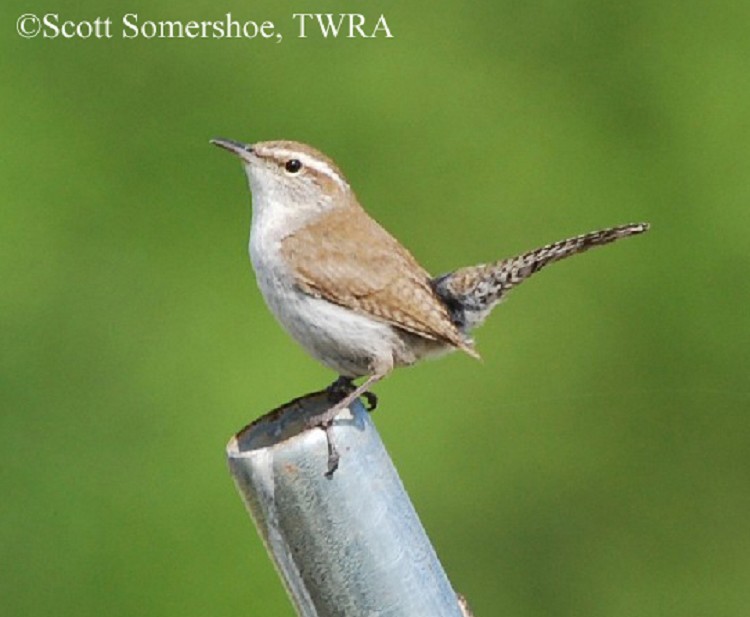 The Bewick's Wren was once a fairly common bird in Tennessee.  It was found on rural farms, open woodlands, and upland thickets throughout the state; wherever it could find a suitable nesting "cavity," including in the centers of brush piles, rock crevices, outbuildings, and abandoned automobiles.

By the 1940s it was in decline and is now basically found only in Rutherford County in Middle Tennessee. This species is much more widespread out west, though declining, and is found in the Mid-western states, and along the Pacific coast south to central Mexico.

Description: In the east, this small songbird is light brown above, whitish-gray below, and has a long white eye-line. the tail is moderately long tail, often cocked over its back, with small white corners on the tail feathers. Male and female are similar in appearance.

Nesting and reproduction: In Tennessee nesting activities have been recorded in late February, but most birds begin nesting in late March.

Fledging: Both adults feed the nestlings, which leave the nest in 13 to 14 days. Two broods are often raised.

Nest: Both birds build the nest in a cavity-like located in an old building, a junk car, a bird house, or in a brush pile. The nest is globular in shape with a side opening, made of sticks, grasses, weed stems, and lined with moss and other fine materials.

Status in Tennessee: Rare breeding bird in Tennessee. Currently only 1 or 2 pairs are found per year in Rutherford County. Due to a declining population, the Bewick's Wren is a designated as Threatened in the state of Tennessee. In 2010, 4 singing males were found in Rutherford County. One of these birds had a mate and a nest was documented at a second location. The remaining two singing males were thought to be unmated.