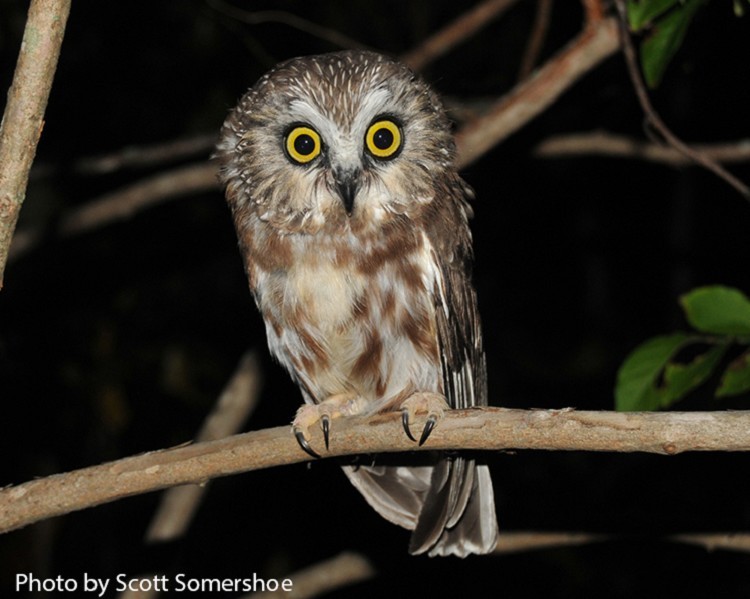 The Northern Saw-whet Owl is the smallest bird-of-prey in North America.  The male is about 25% smaller than the females and weighs about as much as an American Robin.

Like most owls, the Saw-whet is active at night, and hunts from a low perch waiting for a woodland mouse to move nearby.  During the day it usually roosts in dense evergreen trees.

The Northern Saw-whet Owl breeds in the forests of the west and the northeast.  The mountains of Tennessee and North Carolina represent the southern limit of that range. I n winter the northern-most breeders migrate southward across the United States.

Description: The Northern Saw-whet Owl is a small, round headed owl with a pale face, outlined in brown. It has yellow eyes, the upperparts are brown spotted with white, and the pale breast has brown streaks.

Voice: The song is a long series of mechanical to-to-to-to, often repeated more than 100 times!

Habitat: In Tennessee, most nesting records are from high elevation (above 5,000 feet) in spruce-fir forest. During migration, they have been captured in mist nets in deciduous and mixed forests primarily in Middle and East Tennessee.

Nesting and reproduction: Northern Saw-whet Owls are monogamous and raise a single brood per year.

Incubation: The female incubates the eggs for 27 to 29 days, while the male brings her food.

Fledging: The male feeds the young for the first 2 weeks and then both adults feed them. The young fledge at 27 to 34 days and will stay with the adults for at least a month. Unlike most owls, fledglings can fly reasonably well immediately after leaving the nest.

Nest: Northern Saw-whet Owls nest in tree cavities, usually old woodpecker holes, especially those of the Northern Flicker, and will accept nest boxes (see link below). They add no nesting material but wood shavings should be added to new nest boxes.

Status in Tennessee: Locally rare permanent resident in the mountains of East Tennessee, and a rare migrant and winter resident across the state. Due to its small population size, it is listed as Threatened in the State of Tennessee.

Best places to see in Tennessee: The best place to see a Northern Saw-whet Owl in Tennessee is on Roan Mountain near the North Carolina line, and on the road from Newfound Gap to Clingman's Dome in the Great Smoky Mountains National Park. They are most likely to call on clear nights, with some moonlight, and little or no wind, in April and May.