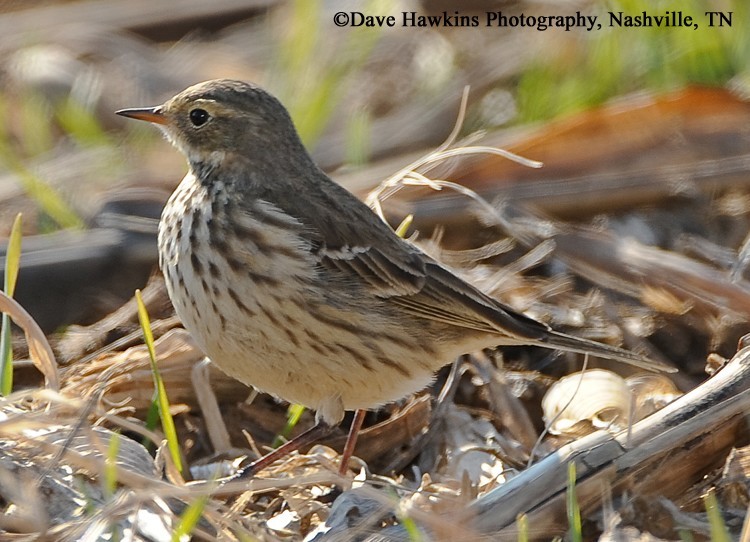 The American Pipit, formerly known as the Water Pipit, is a rather drab brown bird that is found in Tennessee only in the winter.  It might be confused with a sparrow, but has a thin bill and a habit of bobbing its tail.

This bird breeds in the arctic and alpine tundra across North America, and in migration and winter it uses coastal beaches and marshes, short grassy pastures, recently plowed fields, mudflats, and other sparsely vegetated habitats across the southern United States south to El Salvador.

Description: This slender songbird is brownish-gray above with faint streaking, whitish-buffy below with moderate streaking, a buffy eyebrow stripe, a mostly dark slender bill, dark legs, and a tail with white outer tail feathers. American Pipits frequently bob their tails while standing.

Diet: Mainly terrestrial and freshwater insects and some seeds.

Nesting and reproduction: There has never been a documented nesting attempt by an American Pipit in Tennessee.

Status in Tennessee: American Pipits are a locally common statewide winter resident, more numerous in the southern parts of the state. They are an uncommon to common migrant statewide in the spring and fall, and may be found from early October to late April. Rangewide, populations appear to be stable.

Verbeek, N. A. and P. Hendricks. 1994. American Pipit (Anthus rubescens), The Birds of North America, No. 095 (A. Poole and F. Gill, eds.). The Academy of Natural Sciences, Philadelphia, PA, and The American Ornithologists' Union, Washington, D.C.