The largest terrestrial salamander in North America and the one with the greatest range, the Tiger Salamander is a subterranean denizen found sporadically in the middle and eastern portions of the state.

Description:
Typically 7 to 8 ½ inches (though some specimens have reached 13 inches) the Tiger Salamander has a large stocky body with stocky limbs and a broadhead.

The color and pattern of this species varies widely but consists of yellow, greenish, brown, or bronze spots or striations on a base color of dark brown or gray-black. The belly is olive-yellow and marbled with darker colors.

Similar Species:
The Spotted Salamander has spots that form an irregular row and the belly is gray.

Habitat:
Across their range, Tiger Salamanders occur in forests, grasslands, and marshy areas and are less dependent on forests than other species in their genus. One general requirement is the soil in which they are able to burrow.

Breeding information:
Warm rain in late winter or early spring often prompts Tiger Salamanders to migrate to their breeding ponds. Eggs are laid at night and females produce anything from 100 to 1,000 in a season.

Status in Tennessee:
Deforestation has caused population declines throughout the southeast.

Fun Facts:
•Tiger Salamanders excavate their own burrows and tunnel deeper than other salamanders
•Captive specimens have lived as long as 25 years

Best places to see in Tennessee:
Found in the middle and eastern parts of the state, but more research is needed to determine the exact range of this species. 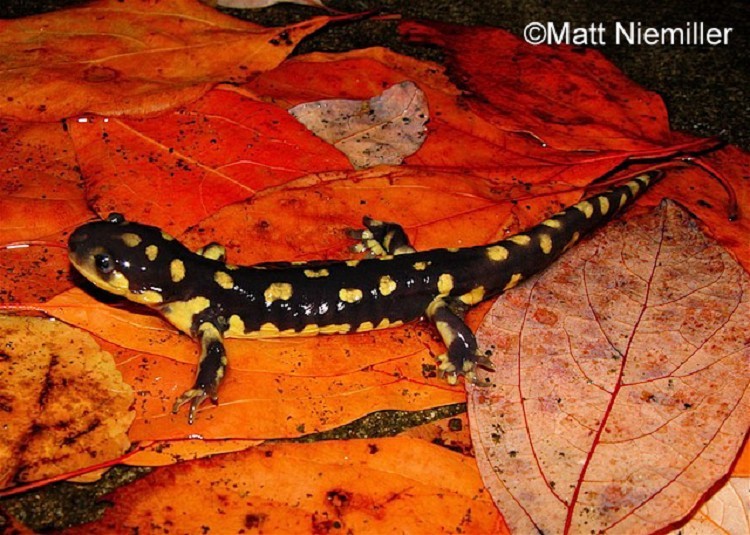