Found across the state in a variety of habitats, the Spotted Salamander is one of our more abundant species.

Description:
This large (as long as 7.75 inches) attractive salamander has a dark purplish-black, steel gray, or black body. There are two irregular rows of bright yellow to yellowish-orange spots starting on the head and extending down the back to the tip of the tail.

Similar Species:
The Eastern Tiger Salamander has spots that are irregular, often elongated, and which extend down the sides.

Habitat:
Spotted Salamanders are most abundant in deciduous bottomland forests along rivers, but they can be found in upland mixed or coniferous forests if the climate is sufficiently wet and there have access to ponds that are suitable for breeding.

Breeding information:
The Spotted Salamander is an early spring breeder and warm rains often trigger mass migrations to the ponds where they mate. Females attach compact egg masses covered in a thick, clear, or milky-white jelly onto submerged objects.  Each female lays around 100-300 eggs per year in several separate masses.

Status in Tennessee:
Common and widespread.

Fun Facts:
•Spotted salamanders have poison glands in their skin, mostly on their backs and tails. These glands release a sticky white toxic liquid when the animal is threatened

•When it's time to breed these salamanders try to return to the pond they hatched in. They are able to locate their pond even when moved hundreds of yards away 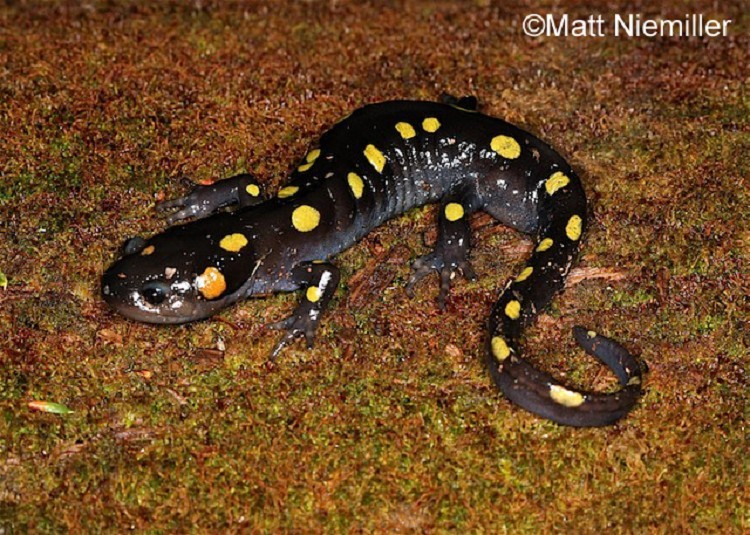