Found in the eastern quarter of the state the Seal salamander, occurs more commonly in the Blue Ridge and Cumberland Mountains but has also been documented in Appalachian Ridge and Valley and Cumberland Plateau.

Description:
A fairly large species (3.0 to 6.0 inches in length) has light brown to grayish dorsum with black or dark brown reticulated or irregular splotches (also described as "wormy" markings). The belly is very pale, often white, creating a sharp contrast with the back color. The tail is triangular in cross-section towards the end and is moderately keeled.

Similar Species:
•Black-bellied Salamander has a black belly and two rows of small white dots along the side of the body.
•Shovel-nosed Salamander has different shaped head and gray to dark bellies.

Habitat:
Occurs in streams, along stream banks, and on wet rock faces. The species prefers well-oxygenated, cool streams with a moderate to steep gradient.

Breeding information:
Between 13 and 39 eggs are deposited under leaves, moss, or rocks between June and August. Hatching occurs in late summer to early autumn.

Status in Tennessee:
Seal Salamanders remain abundant throughout most of their range. Potential threats include a decline in water quality from timber harvesting or mining.

Fun Facts:
•Name comes from its behavior of holding its head up while resting suggestively of a seal.
•Seal Salamanders may live to 11 years old.

Best places to see in Tennessee:
Most common at lower to middle elevations in Blue Ridge and Cumberland mountains in fast-moving streams. 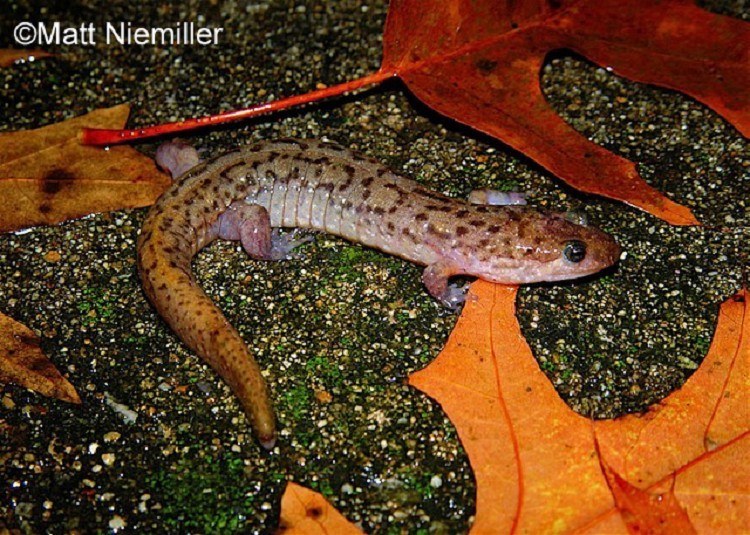