A widespread inhabitant of woodlands in the eastern United States, the Marbled Salamander is noted for its unusual breeding behavior. Unlike most other salamanders, it breeds on land rather than in water.

Description:
The marbled salamander looks like it just came out of the chrome plating shop with its metallic silvery-white to gray bands on the dorsum of its black body.

A medium sized (3.75 to 4.75 inches), stout bodied salamander, males and females can be told apart by the color of their crossbands; males have silvery-white bands, while females have gray bands.

Habitat:
Adult marbled salamanders live in damp woodlands, often close to ponds or streams. They are occasionally found around dry hillsides, but never far from a moist environment.

Diet:
The Marbled Salamander is a voracious predator and eats large amounts of food for its size. Small worms, insects, slugs, and even snails make up its diet.

Breeding information:
This salamander is the only member of its family in Tennessee to mate and lay eggs upon land.

Females construct nests just below the leaf litter of dried beds of temporary or drying ponds in the fall. Females will often stay to protect the eggs from small predators and fungus. Eggs hatch when the nest is flooded during winter or early spring rains.

Fun Facts:
•Marbled Salamanders have poison glands in their tails

Best places to see in Tennessee:
Found everywhere in the state except the northeastern corner.

For more information:
Animal Diversity Web - The University of Michigan Museum of Zoology 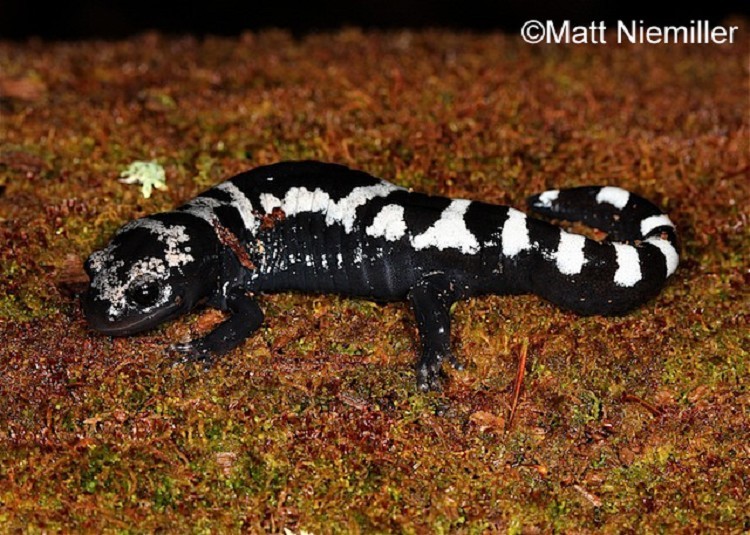