The Long-tailed salamander occurs around karst topography in the eastern two-thirds of the state except for the higher elevations of the Blue Ridge Mountains.

Description: A slender, long salamander (4.0 to 6.5 inches in length) having yellowish-orange to yellowish-brown dorsum marked with numerous black spots. Along each side, the spots may fuse to form an irregular stripe and often fuse on the tail to form a herringbone pattern. The belly is pale yellow.

Similar Species: Cave Salamanders do not have the herringbone pattern on the tail and are more brightly colored.

Habitat: Found beneath limestone rocks and logs near shaded springs or streams. Often found near or within caves and sinkholes.

Diet: A variety of invertebrates, including worms, spiders, mites, ticks, and millipedes.

Breeding information: Courtship and breeding occur during fall and winter in creeks or springs. Females lay between 61 and 106 eggs in small groups, under rocks, in several different areas. Hatching occurs in spring and the larval period lasts less than a year.

Status in Tennessee: Locally abundant throughout its range. Some populations have been affected by habitat loss, clearcutting, and coal mining. 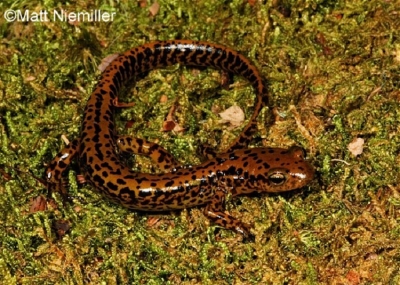