The Imitator Salamander is an endemic species restricted mainly to the Great Smoky Mountains National Park where it occurs at 3000 ft or above.

Description:
A medium-sized species (2.5 to 4.0 inches in length) with a light line extending from the eye to angle of the jaw. Adults are brown to nearly black with many individuals having yellow, orange, or red cheek patches. The belly is usually gray. Typically has wavy dorsolateral bands that may be broken, and that extend onto the back to enclose irregularly shaped light spots. Hind limbs are noticeably larger than forelimbs and tail is round.

Habitat:
Occurs along small creeks and seepages, in moist leaf litter, and on wet rock faces.

Breeding information:
Imitator Salamanders presumably breed both in autumn and spring. Average clutch size of 19 eggs is deposited under moss or under rocks in seepage areas.

Status in Tennessee:
Abundant in typical habitats. This species is found in higher numbers in undisturbed sites, but the population is not threatened by logging or mining within the Great Smoky Mountains National Park.

•As the name suggests, some specimens mimic the red-cheeked Jordan’s Salamander, which is distasteful and avoided by most predators. This represents one of the best examples of Batesian mimicry in the animal world. 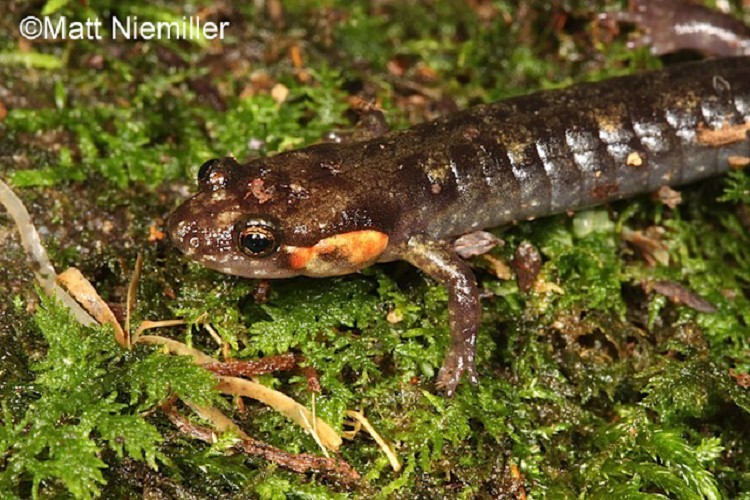