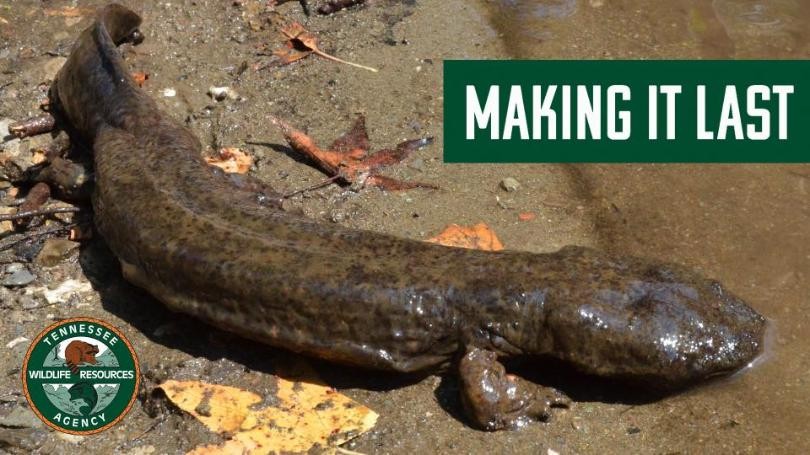 The Hellbender is an unusually large salamander that resides in rivers and big streams, the Hellbender has been described by some as grotesque and frightening.

Its odd appearance has spawned a number of myths, one being that the species has a poisonous bite.   The truth is it's completely harmless.

Description:
Tennessee's largest salamander is the Hellbender at 11.5 to 20 inches long. The Hellbender is an aquatic species that live in clean, fast-flowing streams and rivers, where large flat rocks provide plenty of cover from predators.

Small eyes in a large flattened head, slimy skin secretions and loose folds of skin along the sides of the body contribute to the bizarre look of this salamander.

Usually gray, it can vary yellowish brown to nearly black and can also exhibit scattered and irregular spots that can be dark or light in color.

Hellbenders are nocturnal and search at night for small fish and crayfish.   Occasionally they are caught by fishermen using baited hooks.

A harmless species, this once abundant salamander has declined throughout much of its range due to impoundments and pollution.

It occurs sporadically throughout the eastern two-thirds of Tennessee and is currently listed by the State of Tennessee as being “In Need of Management.”

Habitat:
The Hellbender is found in clear fast-flowing rivers and streams that have abundant cover such as logs and debris.

Diet:
Strictly carnivorous, crayfish are the preferred food of Hellbenders but they will also consume insects, fish, and worms.

Breeding information:
At the onset of the breeding season, the male excavates a nest site that he will defend from other males.    The nest site is typically found beneath flat rocks or other debris.

Males entice females to enter the nest site and lay their eggs that are spherical and between 5 and 7 millimeters in diameter. The egg mass will contain anywhere from 270 to 450 eggs.

Often times the male will attract more than one female to the nest site in a season so there could be as many as 1,000 or more eggs per nest site.

The male will remain with the eggs until hatching 68 to 84 days later to provide protection from predators.

The larvae keep their external gills for about one and a half years or until they reach become about 4 inches long.   At this stage, the larvae resemble the larvae of other salamanders and lack the flattened body and skin folds of adults.

Status in Tennessee:
The Hellbender was once abundant but has declined significantly because of stream impoundment and pollution.   It is listed by the state as being a species "In Need of Management."

•Male Hellbenders are highly territorial and will even cannibalize smaller rivals

Best places to see in Tennessee:

The Hellbender is found in the eastern two-thirds of the state.