The Common Mudpuppy is a large aquatic salamander found in large streams with fast-flowing water and rocky bottoms, and also reservoirs throughout most of the state. Mudpuppies are fairly common but rarely seen. They received their name from the mistaken belief that they make barking sounds.

Description:
Mudpuppies are generally 8 to 13 inches long.   They are permanent larvae, meaning they retain their dark red, bushy gills throughout their life.   A dark line extends through the eye to the gills and the brown, rusty brown, gray or black body has large dark bluish-black to black splotches.   The underbelly is whitish to gray and may also be spotted.   It also has a very snubbed nose.

Similar Species:
The larger Hellbender lacks the bushy gills of the Mudpuppy.

Habitat:
The Mudpuppy is an aquatic salamander that lives in large streams with fast-flowing water and rocky bottoms. It is also found in reservoirs. They reside beneath logs and rocks during the day and emerge to feed at night.

Diet:
Mudpuppies are opportunistic feeders and will eat whatever they can catch. Crayfish are a major part of their diet, but they also eat insect larvae, small fish, fish eggs, aquatic worms, snails, and other amphibians. They have been known to eat carrion and are often caught in traps that are baited with dead fish.

Breeding information:
Courtship and mating take place in the fall. Fertilization is internal, with the female taking up the male's spermatophore in her cloaca and storing it there until spring, at which time females excavate nest cavities and suspend from 18 to 180 eggs from the cavity ceiling. Nests are constructed in areas with rocks, logs, or other debris for shelter. It takes 4 to 6 years for a Mudpuppy to reach sexual maturity.

Status in Tennessee:
Fairly common throughout the state except in the northwestern portion.

Best places to see in Tennessee:
Mudpuppies are rarely seen though they inhabit large streams throughout most of the state. 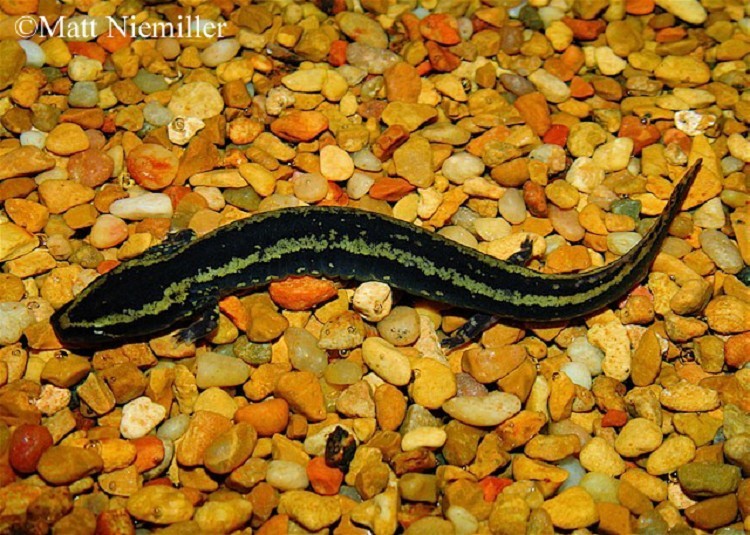