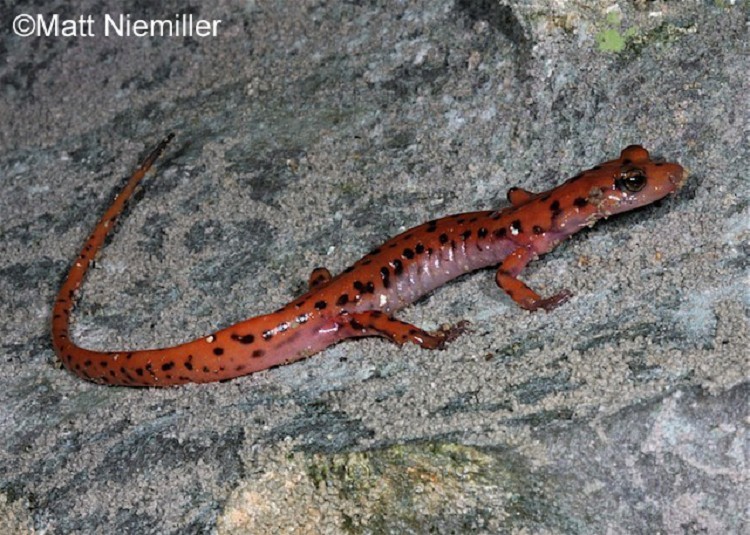 The Cave salamander occurs in caves in the karst topography of the eastern two-thirds of Tennessee.

Description: An long (4.0 to 6.0 inches in length) bright orange to reddish salamander with black spots scattered over body, legs, and tail. The belly is yellow and unmarked.

Similar Species: Long-tailed Salamanders have a herringbone pattern on the tail and are duller in color.

Habitat: Primarily cave entrances and ‘twilight zones’ of caves, where light is weak. Occasionally in forests, springs, or streams.

Diet: Variety of invertebrates including flies, crickets, beetles, moths, mites, and other insects.

Breeding information: Very little known. Breeding occurs in summer with egg-laying transpiring in fall and winter. Female lays 50 to 90 eggs under rocks or on stream bottom of caves; occasionally outside of caves. The larval stage lasts 12-15 months.

Status in Tennessee: Uncertain due to difficulty in obtaining population data. Vulnerable to disturbance and subsurface pollution.

Best places to see in Tennessee: Cave entrances in the middle or east Tennessee.