Description: A small, slender salamander (2.5 to 4.0 inches in length) having yellowish, or sometimes greenish or orangish, dorsum with two broad, black lines extending from the eye along the top of either side to the middle of the tail where line breaks into dots. Many individuals also have black spots along the back between the two lines. The belly is whitish to yellow.

Similar Species: Separated by Southern Two-lined Salamander by range and markings (more yellow to brownish and has solid black lines along the top of either side of back).

Junaluska Salamander resembles both two-lined salamanders, but has no distinct black stripes on the sides and has a shorter tail.

Habitat: Found in moist habitats of Blue Ridge Mountains. Commonly found beneath rocks, leaves, and logs along the edges of woodland streams and seeps, but some may occur on the forest floor.

Breeding information: Adults migrate to breeding streams in late winter to early spring. Between 8-56 eggs are attached under rocks in streams; sometimes under logs, sticks, or leaves. Female attends the eggs until they hatch in spring. The larval period lasts from 1-2 years.

Status in Tennessee: Abundant throughout their range and one of the most abundant salamanders in Great Smoky Mountain National Park. Potential risks include habitat destruction through activities such as clearcutting and acid mine drainage. 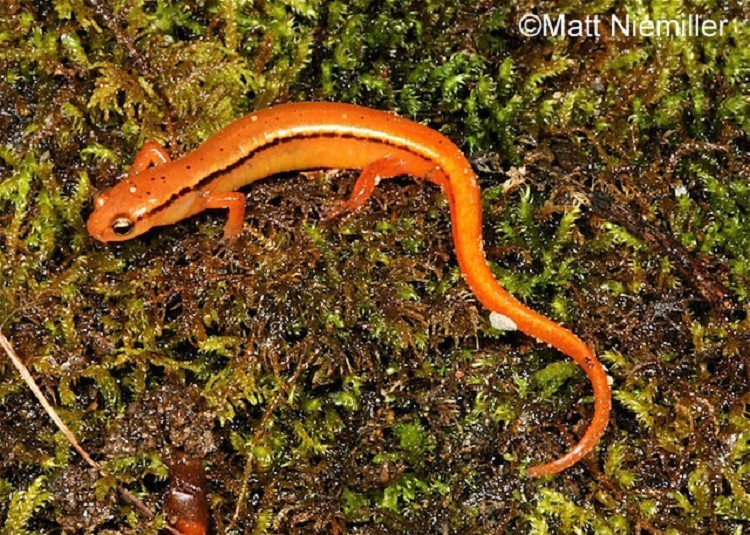