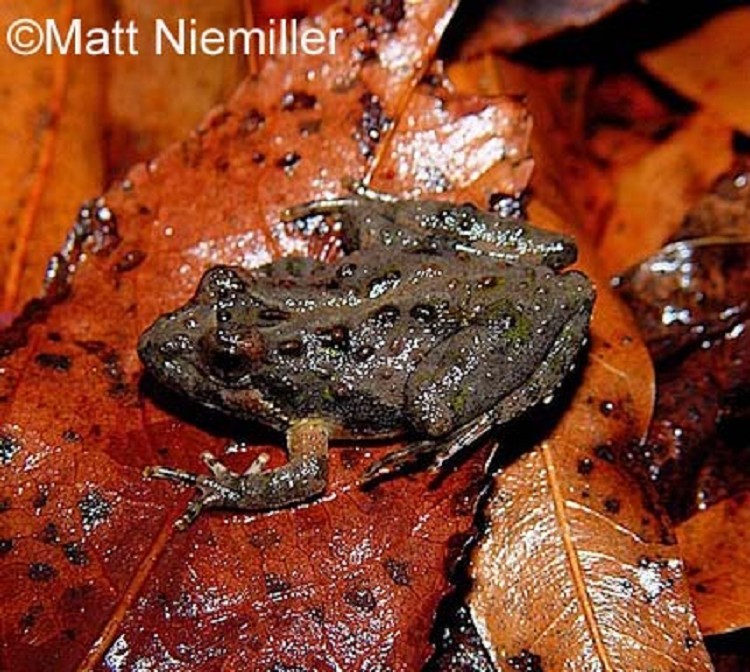 A small frog found near ponds, lakes and slow-moving streams, the Northern Cricket Frog is widespread in Tennessee, occurring statewide except in the highest parts of the eastern mountains.

Description:
At 0.6 to 1.3 inches, the Northern Cricket Frogs are our smallest Tennessee frogs. These tiny frogs are jewel-like and are marked in a wide variety of brilliant colors. They have a dark triangle between their eyes and usually a bright "Y" stripe running down their back. They differ from the southern cricket frog in having more than half of the longest toe on their rear feet webbed. This characteristic can be seen with binoculars at close range in the field.

Similar Species:
Distinguished from the very similar Southern Cricket Frog in having more than half of their longest toe on the rear feet webbed. Also, note slightly different vocalization and range.

Voice:
The call sounds like two small pebbles being tapped together. The tapping starts out slowly, accelerates in tempo and then slows. They can be heard from March through July, but calling usually starts in April and peaks in May.

Habitat:
The Northern Cricket Frog prefers the edges of ponds and streams with submerged or emergent vegetation.

Breeding information:
Females lay clusters of 10 to 15 eggs, laying up to 200 eggs on the water surface and attaching them to vegetation. Metamorphosis of tadpoles takes from 1 to 2 months. Northern Cricket Frogs become sexually mature within 1 year.

Status in Tennessee:
Common though numbers have been declining since the 1970s.

Fun Facts:
•Their lifespan averages only four months. Populations can completely turn over in six months
•They are primarily diurnal and can be found basking on sunny spots in groups
•Northern Cricket Frogs can jump more than three feet, and they often jump in a zig-zag pattern to escape predators