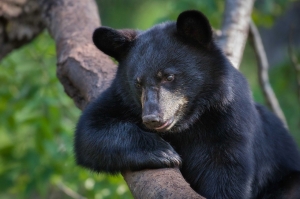 The term "urban sprawl" sounds ugly and conjures up images of huge cities sucking up countless miles of flora and fauna. Unfortu­nately, that's exactly the case. With the ever-increasing population in this country and the growing need and desire for more space, wild ground seems to be shrinking on a daily basis all around us. In fact, it almost appears some people have a hatred for trees, because everywhere there's a patch of trees growing, there always seems to be someone lurking nearby with a bulldozer.

Along with the growing number of humans, most animal species are thriving as well. In fact, many animals are at higher numbers now than they have been in many years. Mostly this is due to better regu­lated hunting and proper management.

It's very rewarding to see so many animals, including some which had fallen to very low numbers, bounce back and become vibrant again, making our woods and waterways full of wildlife to enjoy. But, with every positive there is usually always a negative. The downside to so many people and so much wildlife is when the two collide and compete for the same living space.

Incidents with urban wildlife are nothing new, but conflicts definitely seem to be increasing according to Greg Wathen, who is Wildlife Division Chief for the Tennessee Wildlife Resources Agency (TWRA). "The human population in Tennessee is growing and has been for decades," he said. "Deer, turkey, hogs, and bears have all in­creased in number and coyotes have expanded their range. I think it's (conflict) a growing problem."

The TWRA gets all kinds of calls from the public and those pertaining to problems with urban wildlife are on the increase. Complaints range from squirrels in the attic, to skunks under the house, to black bears eating dog food off the back porch. Some calls are seasonal, some are of legitimate concern, and some are just plain ridiculous. Nonetheless, most all people have strong feelings about animals.

Wathen said urban wildlife even causes conflicts between neighbors. Some people like to see wildlife nearby and will even facilitate them by feeding or otherwise encouraging their presence. Other neighbors may not want animals close to their living space and will complain. It's a no-win situation.

"We're seeing these animals because they are adaptable and able to coexist with humans," said Tim White, who is not only the Waterfowl Program Coordinator for the TWRA, but also the Animal Dam­age Control Coordinator. "People are going to have to accept the real­ity that these animals are here and are only doing what comes natural to them. I hate to sound callous, but if a person ignores the leash law and lets their house cat or dog roam freely through the surrounding woods and it gets eaten by a coyote, it's not the coyote's fault. He's out there. That's what he does."

Most of the calls are taken on a local level according to White. He said local TWRA wildlife offices get a lot of calls and are accus­tomed to hearing most everything. Unfortunately, the TWRA doesn't have the manpower to address most of these complaints, but there are solutions.

All across the state there are individuals and companies that specialize in dealing with animal problems. These people must apply for and obtain an Animal Damage Control Permit. This allows the person or company to contract with landowners and charge a fee for removing unwanted wildlife.

Local TWRA wildlife offices have lists with the names of all these animal damage control spe­cialists in the area. The TWRA does not recommend companies for help; rather they will provide the names of all companies located within the area and allow the callers to make their own choice. In areas where there may be very few or no permit­ted animal control entities, the local TWRA office will often include the names of damage control compa­nies and individuals in surrounding counties.

Individual home owners and landowners are not without options either if they feel they can deal with the problem themselves. As a property owner, individuals have the right to deal with destructive and otherwise undesirable wildlife as necessary. This may involve trapping and relocating an animal or it may mean humanely disposing of the animal. However, there are certain regulations which must be followed.

Many animals may be trapped and relocated, but they may not be relocated just anywhere. For instance, it would be perfectly legal for someone to trap a squirrel in the attic and release it somewhere out on the farm owned by that individu­al. However, it would not be legal to trap a squirrel and take it down to a neighbor's property or the local city park and release it. Permission must be obtained before any animal can relocated on other private or public property. It can't just be hauled down the street and dropped off somewhere.

Furthermore, certain animals fall under strict regulations and may not be relocated at all. This in­cludes furbearers and animals such as skunks and raccoons. Animals prone to carrying rabies or other diseases are much more regulated.

White recommends calling the local wildlife officer prior to undertaking any dispatch or reloca­tion. This not only helps keep the landowner legal, but also may help prevent any future problems regard­ing an otherwise legal endeavor. White said neighbors often witness a homeowner trying to deal with an animal issue and call the local wildlife officer to report it as a violation. If the landowner has made the officer aware prior to the act, it usually prevents an unexpected visit and question and answer session.

Certain animals require permits prior to being dispatched. Mostly, this means big game animals such as deer and others. Depredation permits allow landowners to remove unwanted deer, bear, hogs and oth­ers which might be destroying crops or other plantings.

Individual homeowners or animal damage control permittees may not be equipped to handle all problems, though. In instances of dangerous situations or concerns with disease, the TWRA will usu­ally handle these problems directly. Diseased animals must be handled carefully to avoid further problems or spread of the disease.

Wathen said bears are of par­ticular concern because they can be a threat to public safety. This is especially true if they have shown aggressiveness toward humans or have simply lost their fear of man and are coming too close to popu­lated areas. The TWRA will often try to relocate these animals to more remote areas, but unfortunately, once humans have acclimated a bear to people and associated food sources, relocation often does not work. Some bears become problem­atic and don't remain at relocation areas. In cases of repeat offenders, some bears must be euthanized to remove the threat.

Migratory birds fall under federal jurisdiction and complaints to the TWRA about them usually are directed to the wildlife services division of the local USDA office. Some of the most common birds falling under this category include Canada geese, cormorants, vultures and others.

There's only so much space available for use by animals and humans alike. Conflicts are un­avoidable, but they don't have to create intense and unmanageable situations. A wide range of options are available to help deal with most problems with unwanted urban wildlife. Homeowners, landowners, and farmers all have accessible solutions to help coexist with urban wildlife. It just takes a little effort and understanding.

Paul Moore is a freelance writer from Henderson, Ky., with publishing credits in more than. Dozen national and regional magazines.