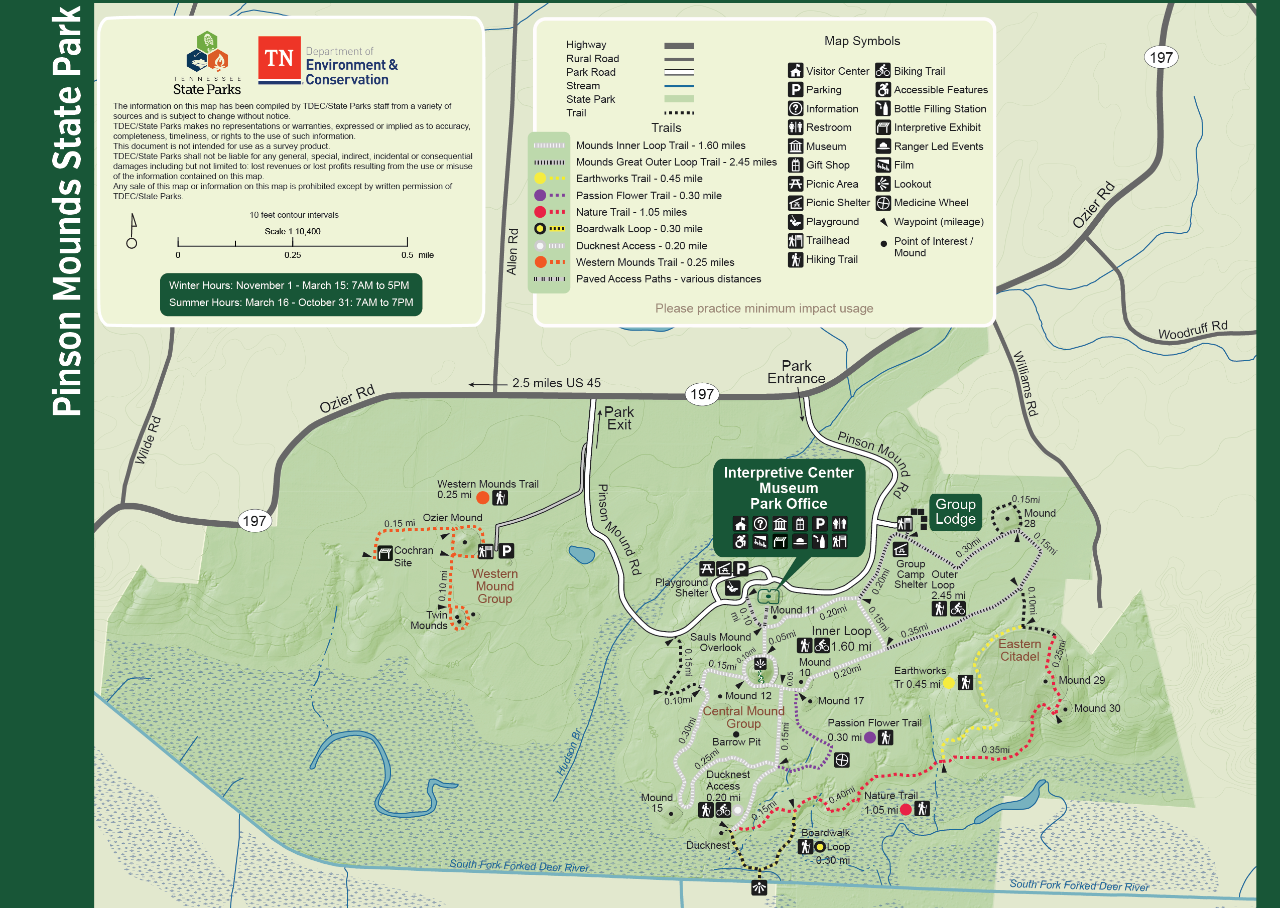 Pinson Mounds State Archaeological Park is located in West Tennessee, about 15 KM southeast of Jackson, TN and two and a half miles east of the town of Pinson. The site is mostly contained within Madison County, but part does spill over into Chester County. It is located in one of the few areas of relatively flat terrain in the immediate vicinity and sits on a bluff overlooking the floodplain of the South Fork of the Forked Deer River.

The Tennessee Division of Forestry purchased 310 acres of land in Pinson, TN in 1947 to establish a tree nursery. Part of this property contained the Western Mound Group of the Pinson Mound Complex, specifically Ozier Mound, the Twin Mounds, and Mound 31. Between 1962 and 1972 the Tennessee Department of Conservation purchased the remainder of the Pinson Mound archaeological site. In 1964 the site was listed as a National Historic Landmark and in 1974 it was listed on the National Register of Historic Places. Work to transform the state property into a state archaeological park, which included the construction of a museum with an archaeological laboratory and curation facility, began in the 1970’s and finished in 1981 when it was opened to the public. The Tennessee Division of Archaeology still uses the curation facility as their main repository of accessioned archaeological collections today.

Pinson Mounds (40MD1) encompasses around 160 hectares and early accounts of the site estimated upwards of 35 mounds and miles of manmade embankments. More recent archaeological research has only been able to confirm the presence of 13 mounds, around 3,500 linear feet of a circular earthen embankment, and four short-term ritual-activity areas. Many of the earlier identified mounds have been shown to be natural features in the landscape and are not of cultural origin. Recent LiDAR data and geophysical surveys have provided additional data concerning site topography and are allowing archaeologist to further evaluate the archaeological features at the site.

Sauls Mound (Mound 9), the largest mound at the site, sits in roughly the center of the complex and stands 22 meters tall and 100 meters in diameter. It is the main focus of the area termed the Central Ritual Precinct or the Central Mound Group, which also includes Mound 11, Mound 10 (a small, oddly shaped platform mound ), and Mound 12 (a small elliptical burial mound). South of Sauls Mound along a bluff overlooking the South Fork of the Forked Deer River are Mound 15 and a circular embanked called the “Duck’s Nest”. East of Sauls Mound in the Eastern Ritual Precinct/Eastern Citadel are three other mounds, Mounds 28, 29 and 30.  Mounds 29 and 30 are surrounded by an embankment that encircles an area of 6.7 hectares and is about 363 m in diameter and two meters tall. Much of this earthwork has been destroyed by erosion and cultivation.

West of Sauls Mound is the area termed the Western Mound Group, which consists of at least four other mounds, of which Ozier Mound (Mound 5) is the biggest. Ozier is the second largest mound at Pinson standing 10 m high and is flat topped with a prominent ramp that extends from the northeast side. The Twin Mounds (Mound 6) lie just south of Ozier Mound and represent a pair of large, conjoined, conical burial mounds also found in the Western mound Group. This mound group is one of the larger burial mounds for the Middle Woodland Period. Mound 31 lies just east of Ozier Mound and is the smallest confirmed mound at the site measuring 10 meters in diameter and one meter tall. Excavations revealed that this was a small burial mound. A possible fourth mound, Mound 36, was found in 1999 within the Western Mound Group and was investigated by the Middle Tennessee State University field school.

Several decades of archaeological investigations and numerous radiocarbon dates indicate that Pinson was constructed and heavily used during the Middle Woodland Period between A.D. 100 to A.D. 350. Ozier Mound and the Twin Mounds were likely the first earthworks constructed at the site sometime between A.D 125 and 219. It is important to note that no clear evidence of a domestic occupation during the Middle Woodland Period has ever been found at the site. Archaeological evidence suggests that the Pinson Mound complex was used exclusively for short-term occupations for ritual purposes and, as the largest mound complex in the Southeast during its time, acted as an important pilgrimage center for people across the eastern US. Ceramics from the site show that people from the Tennessee River valley, the southern Appalachians, the southern Tombigbee River area, the Yazoo Basin, southern Georgia, and even further north in Ohio and Illinois (Hopewell) visited the site.

Sometime after A.D. 350, mound construction at the site ceased and ceramic evidence shows that the mound complex was no longer visited by pilgrims. No evidence of a Late Woodland Period occupation has been found to date, meaning the area was left abandoned for quite some time. Archaeological investigations northwest of Mound 15 found one Mississippian Period wall-trench house at the site, which probably dates to between A.D 1000-1100, but this occupation appears to have been limited and brief.

Surveys of the surrounding area have recorded many Middle Woodland Period sites, suggesting this area of Tennessee was important and heavily occupied during this time. In fact, the State of Tennessee also owns another Woodland Period site in the immediate vicinity called the Johnston Site (40MD3), which is about 5.5 km northwest of Pinson and is managed by the Pinson Mounds State Archaeological Park. Despite this concentration of Middle Woodland sites in West Tennessee, Pinson Mounds stands as one of the few Middle Woodland Mound complexes in the Lower Mississippi Valley.