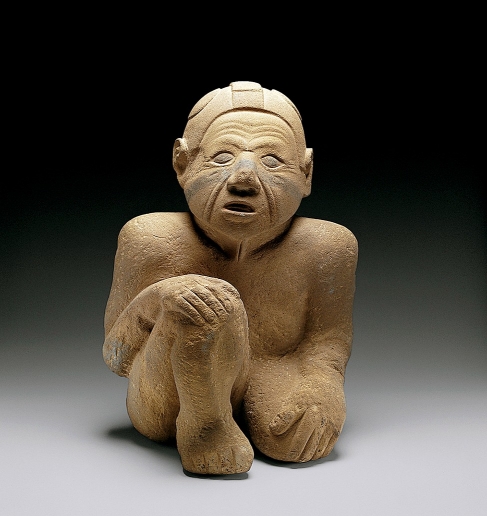 Tennessee's official State Artifact is a stone statue of a kneeling man, carved by a Native American artist between approximately AD 1250 and 1350 during the Mississippian period of Tennessee’s prehistory. The 18.5-inch tall figure was discovered in 1939 by a tenant farmer working at what would become the Sellars Farm archaeological site in Wilson County. That site consists of a Mississippian town, with a platform mound and plaza area surrounded by a palisade embankment. Today Sellars Farm is a State Archaeological Area and satellite of Long Hunter State Park. The State Artifact is part of the collection of the McClung Museum of Natural History and Culture at the University of Tennessee-Knoxville.

Carved stone statues similar to this artifact have been found at Mississippian period sites through the mid-South. There is a wide range of stylistic variation among those statues, among which the Tennessee State Artifact is described as one of the “most intricately and realistically portrayed Tennessee-Cumberland style statues discovered to date.” The statues were often created as male-female pairs, and scholars believe they were associated with the veneration of important ancestors. In 2016, the McClung Museum acquired the female counterpart to the State Artifact. Both are on display at the museum in the permanent exhibition “Archaeology and the Native Peoples of Tennessee.”

The State Artifact has appeared in numerous publications on ancient Native American art and archaeology, including Time Magazine and the scholarly volume Visualizing the Sacred: Cosmic Visions, Regionalism, and the Art of the Mississippian World, and in 2004 appeared on a US Postage Stamp as part of the “Art of the American Indian” stamp series. The statue has been part of major art exhibitions, including the Art Institute of Chicago’s 2004-2005 exhibit “Hero, Hawk, and Open Hand,” the 1992 exhibition “Trésors du Nouveau Monde at the Musées Royaux d’Art et d’Histoire” in Brussels, Belgium, and most recently in the Tennessee State Museum's 2016 Ancestors exhibition.

In 2014 the statue was designated the official State Artifact by the 108th General Assembly (Public Chapter 571, 2014). For more on the discovery and interpretation of the State Artifact, see Smith and Miller's 2009 volume, Speaking with the Ancestors: Mississippian Stone Statuary of the Tennessee-Cumberland Region.

The Tennessee State Artifact is on display at the McClung Museum of Natural History and Culture at the University of Tennessee-Knoxville, located at 1327 Circle Park Drive on the University campus.