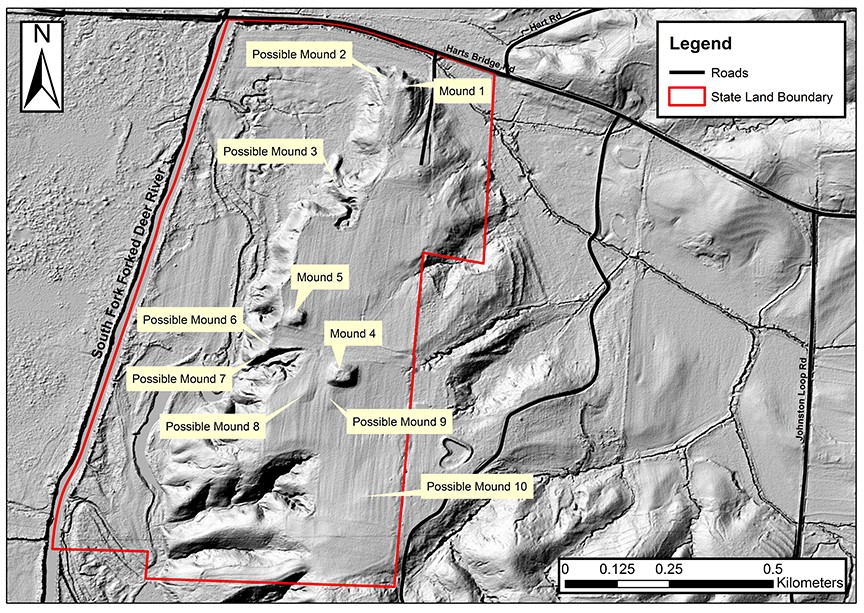 LiDAR Map of the Johnston Site with identified and possible mounds labeled.

The Johnston site (40MD3) is located in West Tennessee within Madison County, about 12 KM south of Jackson, TN and 5.5 km northwest from Pinson Mounds State Archaeological Park. The site is roughly 30 hectares in size and sits on a bluff on the east side of the South Fork of the Forked Deer River. There have been very few archaeological investigations at the site, but what has been done confirmed there to be at least three mounds and some associated habitation areas that predominately date to the Middle Woodland period (A.D. 0 to A.D. 500). Researchers have suggested the site may be earlier and actually predate its neighbor, Pinson Mounds. Historical accounts suggest that there were additional mounds at the site (as many as 10 according to William Edward Myer’s 1917 survey of the site), a cemetery, several walls/embankments, streets/walkways, and a possible historic house built by Col. Thomas Henderson atop one of the platform mounds, but modern investigations have not confirmed their presence.

The largest earthwork at the site is a platform mound (Mound 4) approximately six meters tall and 60 meters squared at the base. It sits at the southern end of the site, about 550 meters south of Mound 1. The flat top of the mound measures about 30 meters squared. The previous owner did excavate a small backhoe trench into the mound and there are several looter pits, but it still appears to be in relatively good shape. A smaller platform mound (Mound 5) is located approximately 80 meters to the northwest of the larger mound, close to the bluff edge. It was described by Myer as being three meters tall, 42 by 47 meters at the base, and 18 by 27 meters on the top. This mound has been somewhat reduced by plowing, but is still largely intact with some looter pits on its top. Along the bluff overlooking a small creek at the site’s northern end, a small conical mound (Mound 1) can be found. This mound stands about two meters tall, with a diameter of around 15 meters. The center of the mound has been disturbed, but no records of any excavations have been found, and it is not mentioned by Myer, which could mean the mound was dug (looted) by someone after Myer’s visit.