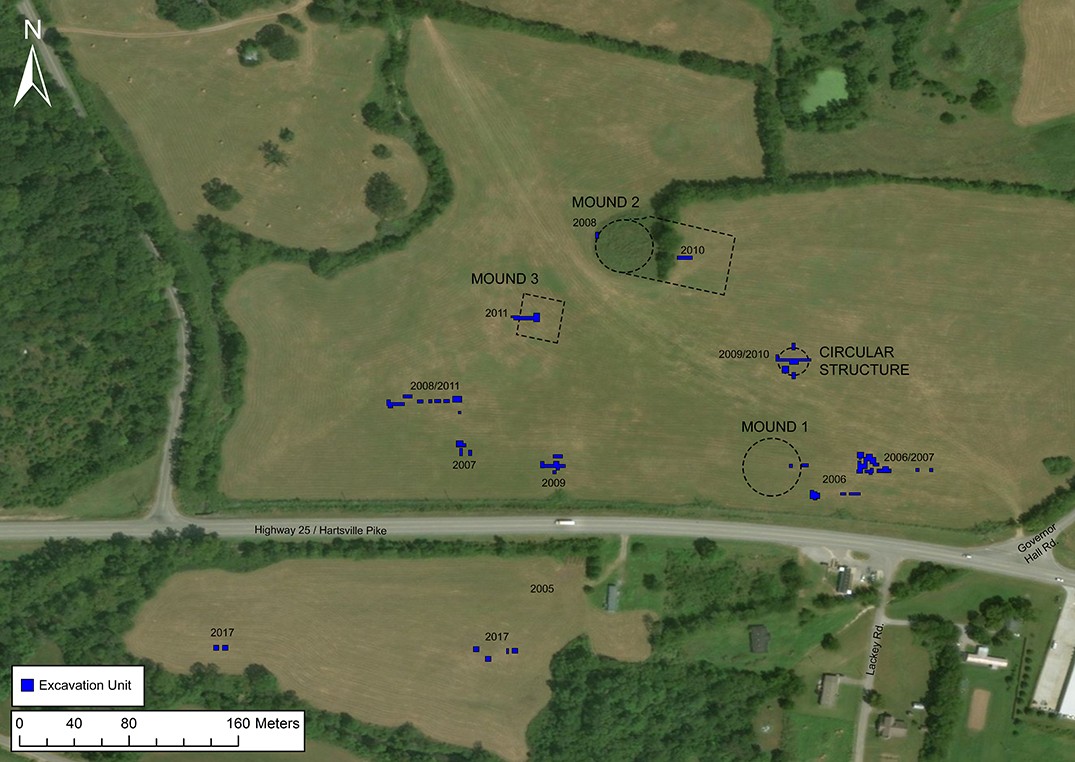 Approximate locations of MTSU’s excavations at Castalian Springs Mounds from 2005-2017.

The largest extant mound at the site, Mound 2, includes a platform surface approximately 200 feet in length and 11 feet tall, adjoined to the west by a roughly 22 foot-tall conical mound measuring approximately 90 feet in diameter. To the southwest of Mound 2 is a plaza area formerly flanked to the west by Mound 3, a platform mound measuring approximately 90 feet in diameter and 7 feet tall. To the west the plaza stood Mound 3, a platform mound believed to have formerly held the principal ritual structure at the site, as well as the community’s Sacred Fire. Several smaller mounds or structure footprints were visible throughout the site core in the nineteenth century CE, but have since been obscured by cultivation. To the south and southwest of the main site area on the bank of Lick Creek were a series of mineral springs and an additional small mound, designated Mound 4.

According to late nineteenth century accounts of Castalian Springs Mounds, a palisade wall and ditch originally encompassed some 40 acres and was laid out with projecting bastions spaced at approximately 95-foot intervals. This fortification enclosed the main mounds and plaza, as well as residential and ritual structures. By 1923, no aboveground evidence remained of the palisade embankment or ditch, and it is possible that historic cultivation erased these features. No definitive archaeological evidence of the palisade feature has been identified at the site to date, and the actual location and layout of the palisade at Castalian Springs Mounds remains somewhat of an enigma.

Native American people occupied in the area along Lick Creek prior to the beginnings of the Mississippian period and onset of mound construction. However, radiocarbon dates indicates that principal occupation of the Castalian Springs site occurred after approximately 1150 CE. Mound construction appears to date to the period ca. 1250-1350 CE, during which time the site is believed to have been the primary seat of a regional polity. Major occupations and mound construction at Castalian Springs end by around 1350 CE, at a time when the Middle Cumberland region of Tennessee witnessed an overall decentralization of political authority. After this time, Mississippian settlement largely shifted away from mound centers to fortified village sites. This shift is followed closely by a period of rapid population decline, culminating in the end of Mississippian occupations by 1425 CE. The fracturing of political structures and regional abandonment at the end of the Mississippian period in the Middle Cumberland are believed to be tied to climate shifts and periods of severe drought may have been contributing factors.