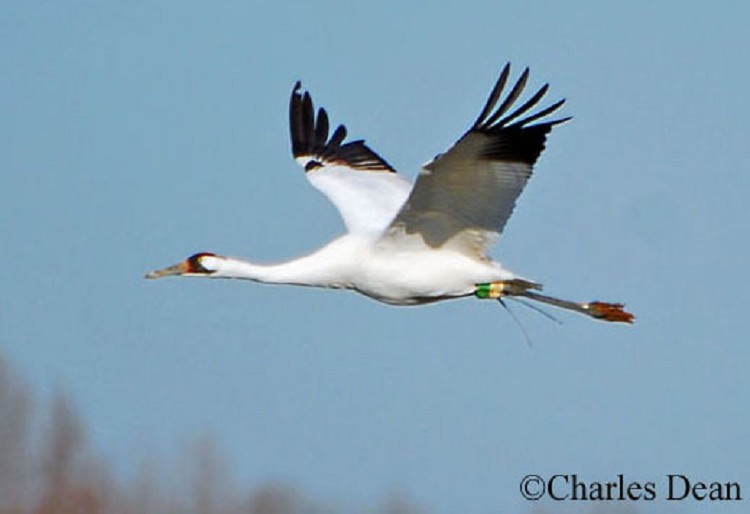 The Whooping Crane is a federally endangered species that is returning from the brink of extinction. In 1941 only 16 individuals were known to exist, but as the result of massive conservation efforts, there are currently over 500 Whooping Cranes.

As of the fall of 2008, there were 387 birds in the wild and 152 in captive breeding programs. The largest wild population nests in Wood Buffalo National Park in the Northwest Territories, Canada and winters in Aransas National Wildlife Refuge in Texas.

For Tennesseans the most exciting recovery effort is the attempt to re-establishment a migratory flock in a part of the Whooping Crane's historical breeding range. Beginning in 1999 captive raised young from Necedah National Wildlife Refuge in central Wisconsin were conditioned to follow an ultralight aircraft.

The aircraft guides them on their first migration south to Chassahowitzka National Wildlife Refuge in Florida. The route takes the birds over East Tennessee where they stop and rest before continuing on their journey.

Once they reach Florida, the birds are then on their own. These cranes have independently returned to Wisconsin and migrated back to Florida successfully the next winter. There are now approximately 80 birds in this experimental flock.

A few of them have come to Tennessee to spend the winter. In the winter of 2007-2008 and 2008-2009 one pair spent the winter in a rural area on the Cumberland River within the city limits of Nashville. See the links below for more detailed information.

Description: The Whooping Crane is the tallest bird in North America. It has a long neck and long legs and a white body with a tuft of feathers on the rump. The wing-tips are black and the top of the head and cheek are covered by red skin. The bill is long and straight.

First-year birds are largely cinnamon-toned with some white, and lack the red on head and face.

Males and females look alike with the male somewhat larger. Cranes fly with their legs and necks extended.

Habitat: Breeds in freshwater marshes and prairies. Uses grain fields, shallow lakes and lagoons, and saltwater marshes on migration and in winter.

Nesting and reproduction: The Whooping Crane has never been known to nest in Tennessee.