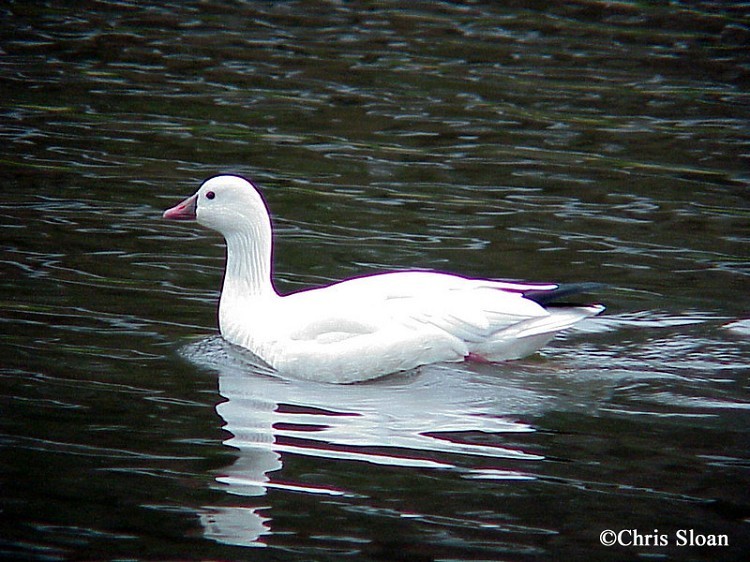 The Ross's Goose looks like a smaller version of the more abundant Snow Goose. It is overall white with black wing-tips and a pink bill.  It breeds primarily in the central Canadian Arctic with Lesser Snow Geese.

Most of the population winters in the central valley of California but increasing numbers are wintering from the north-central highlands of Mexico into New Mexico, and along the Gulf from Texas into Arkansas. They are a regular uncommon migrant and wintering bird in Tennessee, often seen with Snow Geese.

Similar Species: Snow Goose is similar in color, but is larger and heavier, with a proportionately larger head and bill.

Habitat: Found in agricultural fields and shallow wetlands in winter. In the breeding season, they use low arctic tundra, on islands in shallow lakes.

Diet: This is a grazing species that feeds on grasses, sedges, and small grains.

Status in Tennessee: Uncommon but regular wintering bird in West Tennessee; uncommon bird in winter across Tennessee away from the Mississippi River Valley. Often seen migrating, flying, and/or foraging with Snow Geese.

Best places to see in Tennessee: Along the Mississippi River Valley in winter: Reelfoot Lake and along the Great River Rd.  Search flocks of Snow Geese, Greater White-fronted Geese, and Canada Geese for the smaller Ross's Goose.