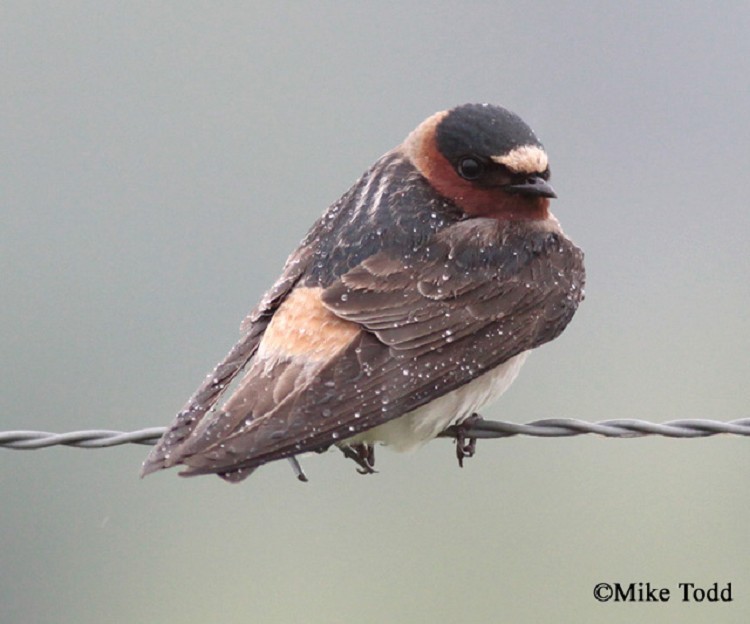 Cliff Swallows are highly social and nest in colonies numbering into the thousands.  They were once strictly a bird of the west, attaching their gourd-shaped mud nests to vertical surfaces underneath horizontal rock ledges.

However, in the past 100 to 150 years humans have been constructing alternative nest sites such as buildings, bridges, etc., and Cliff Swallows have correspondingly extended their range to the east.  They likely started nesting in Tennessee with dam and lock construction in the early 1900s and are now found across much of the state.

Their breeding range now extends from western Alaska eastward to New England, and southward through the central United States to southern Mexico. Cliff Swallows migrate to southern South America for the winter.

Description: The two most distinctive features of this square-tailed swallow are the bright white forehead and tawny rump.  The face is chestnut, the throat is dark, the back and top of the head are a dark dull bluish-black, and it is dull white below.

Adults and juveniles are similar in appearance, but juveniles (June-December) have brown, not blue-black backs, lack chestnut on the face, and have a duller patch on the forehead.

Habitat: In Tennessee, Cliff Swallows usually nest on dams, and bridges over large reservoirs or large to medium-sized rivers.

Nesting and reproduction: While Cliff Swallows frequently nest on barns elsewhere in their range, they only do this in northeastern Tennessee. Most colonies in the state are on concrete dams and bridges; nesting on natural surfaces is rare.

Incubation: Both adults incubate the eggs for 14 to 16 days.

Fledging: The male and female tend the nestlings, which fledge when about 24 days old.

Nest: Both adults build the distinctive, gourd-shaped mud nests. It is constructed of mud pellets, with a small entrance tunnel on one side, and lined with grass.  Nests are placed on a vertical wall, usually just under an overhang.   In Tennessee, most nests are on a human-made surface such as a bridge or dam; nest heights range from 7 to 66 feet above the water.

Status in Tennessee: The first published Cliff Swallow nesting records were in 1936 in Stewart, Montgomery, and Decatur Counties though they likely started nesting in the state much earlier.

Best places to see in Tennessee: Cliff Swallows nest under many large and medium-sized bridges across Tennessee. Colonies may be found along most of the major rivers and tributaries across the state. Some of the best specific locations to view them:

3. Most medium to large bridges in the state now has colonies.

In fall, powerlines near the Mississippi River in west Tenessee are great places to find them concentrating.  The old Tiptonville Ferry Landing is a great place to easily see multiple species of swallow in late summer.

Other areas like Moss Island WMA in Dyer Co can be a good place for post-breeding swallow gatherings.