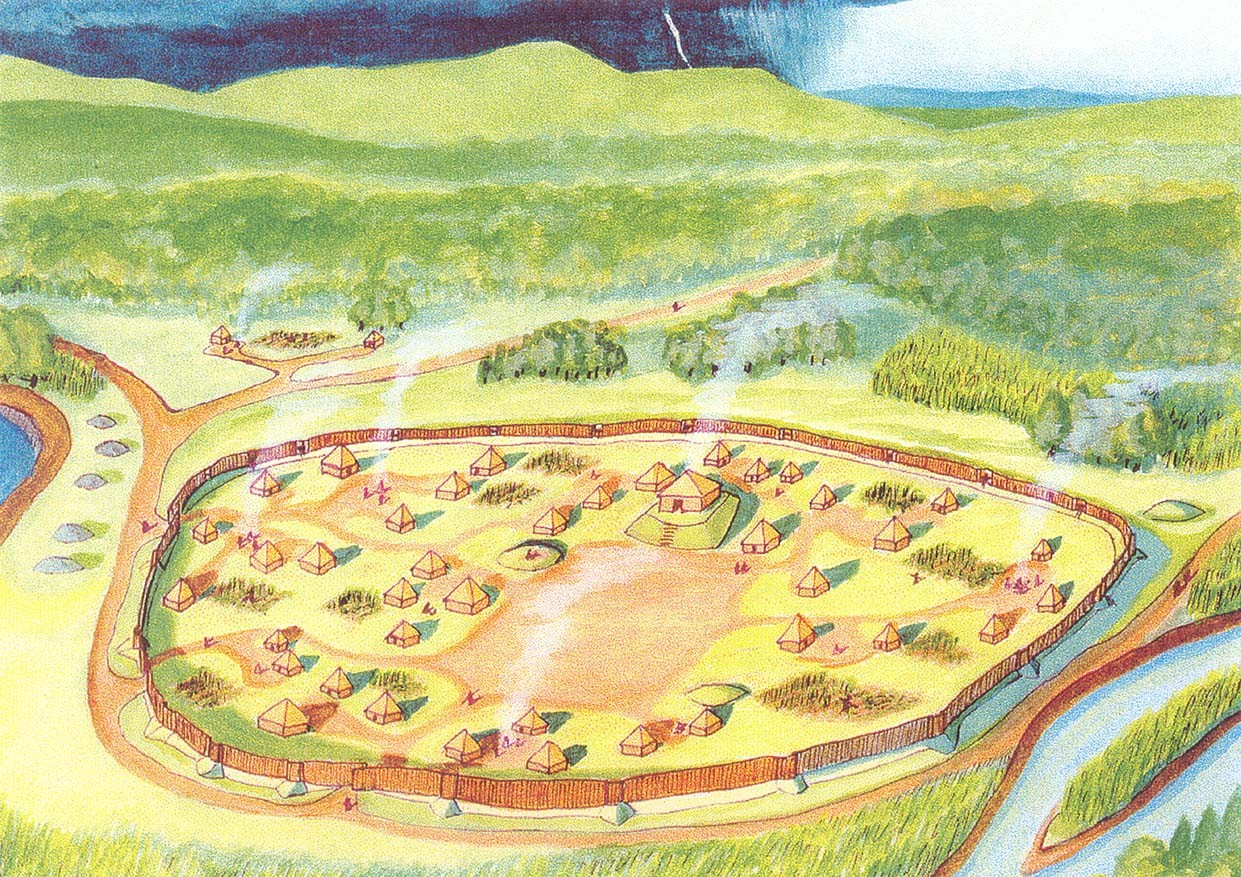 James Miller's recreation of the Sellars Farm village as it may have looked when it was occupied.

The Sellars Farm (40WI1) site represents a relatively small, fortified Mississippian Period (AD 1000-1450) mound center located three miles southeast of the city of Lebanon in Wilson County, Tennessee. The site sits in a prominent bend of Spring Creek and consists of a large platform mound and village area surrounded by a roughly oval palisade embankment and ditch complex. The palisade complex encloses an area of 10.2 acres, and consists of two embankments separated by a shallow ditch.

The platform mound faces eastward across a plaza and is about 4.5 meters tall and slightly trapezoidal in shape, with the wider and slightly lower end to the east. The mound base measures 37 meters long, with widths of 36 and 29 meters on the east and west ends, respectively. About 90 ft. southeast of the platform mound, along the southern edge of the plaza, was a smaller mound where around 60 stone box graves were found during the 1877 excavations by Frederic Ward Putnam with the Peabody Museum.

Domestic structures also occur inside the palisade. An 1877 map of the site defined some 100 low circular ridges of earth. Nineteen ridges were excavated in 1877 by Putnam and were correctly identified as houses. Modern investigations by the Tennessee Division of Archaeology also exposed domestic structures within the palisade.

The palisade itself runs approximately 900 ft. (274 m) north-south and 650 ft. east-west (198 m). The majority of the surface evidence of the palisade has been destroyed by years of cultivation; however, a small segment roughly 45 m long is still visible on the western edge of the site. The inner embankment is approximately 5 m across and 30 cm above the ground surface. A ditch separates the inner embankment from the outer embankment, which is roughly 5.5 m wide and 20 cm tall.

Archaeological investigations and radiocarbon dates suggest the site was first occupied by Mississippian peoples around AD 1100 (Regional Period II- AD 1100-1200) and eventually abandoned sometime before AD 1400 (Regional Period IV- AD 1325-1425). The establishment of Sellars Farm during Regional Period II follows behind the rise of other mound centers in the Middle Cumberland region during Regional Period I (AD 1000-1100), such as the state-owned Mound Bottom site (40CH8). Sellars’ position within the Spring Creek drainage and on the edge of the Nashville Basin suggests it may have served as an important frontier or border town as the drainage represents a strategic and direct overland route from the Cumberland River southward to the Eastern Highland Rim. The abandonment of the Sellars Farm site by AD 1400 corresponds to a larger period of political destabilization (Regional Period IV) throughout Middle Tennessee and parts of the Southeast US that ultimately resulted in wide-scale abandonment of these areas.

The Sellars site was part of a 1786 Revolutionary War land grant to Nathaniel Lawrence, whose heirs, the Lindsley family, eventually took over ownership of the property and established the Greenwood Seminary. It was the Lindsley family, specifically Mrs. N. Lawrence Lindsley, who invited the first archaeologist, Fredric Ward Putnam with Harvard’s Peabody Museum, to the property in 1877.

The land passed through several owners eventually ending up in the hands of James W. Sellars in 1909. The Sellars family was known to have extensively cultivated the site, which resulted in the reduction and, in some cases, complete loss of archaeological deposits such as parts of the palisade and most of the low mounds identified by Putnam. The State of Tennessee acquired the land in 1974 and began the process of turning it into an archaeological area in 2004. Sellars Farm is listed on the National Register of Historic Places.

Notably, Sellars Farm is the location where two pairs of Tennessee-Cumberland style stone statues were found between 1922 and 1939. These statutes were first found as a result of the cultivation of the property by James Sellars, but were later hunted for by local farmers. The most famous of these is the State Artifact of Tennessee, which is displayed in the permanent exhibit "Archaeology and the Native Peoples of Tennessee" at the McClung Museum of Natural History and Culture.