Description: A small, high-domed turtle (4.5 to 6.0 inches in length) with highly variable colors and patterns.   Most Eastern Box Turtle specimens have yellowish to orange spots or blotches intermixed with a dark brown or black background on the shell and skin.   The carapace (upper shell) has a keel running down the center and is more pronounced in juveniles.

Plastron (lower shell) is hinged towards the front third of the shell allowing the front and back to close tight.   Males have a concaved plastron, a longer tail, and red eyes (usually); head and forelimbs may be bright orange.   Females have a flat plastron, brown eyes, and a higher domed carapace. Young have a light yellow spot on each scute (plate).

Three-toed Box Turtles usually have 3 toes on each hind limb, but sometimes 4. Their carapace is a duller olive or tan with darker plate margins. Plastron is light yellow. Their heads and forelimbs are spotted with orange or red, and males heads are red.

Breeding information: Adults mate in the spring and fall. Females dig a nest in sandy or loose soil to deposit 3-8 elongated, white eggs, and can lay up to 3 clutches per year.   Hatchlings emerge after 3 months, but late clutches will not hatch until the next spring.   Box turtles are well developed at birth; however they are not able to completely close their shells.

Status in Tennessee: Common across Tennessee, although populations are in decline. Habitat loss and fragmentation from human development, mortality from cars, and collection for pets are putting these populations at risk.

Fun Facts:
• The only turtle in Tennessee that can completely close itself in its shell (and very tightly) due to its broad hinged lower shell.

Johnson, T.R. 2006. The Amphibians and Reptiles of Missouri. The Missouri Department of Conservation, Jefferson City, MO 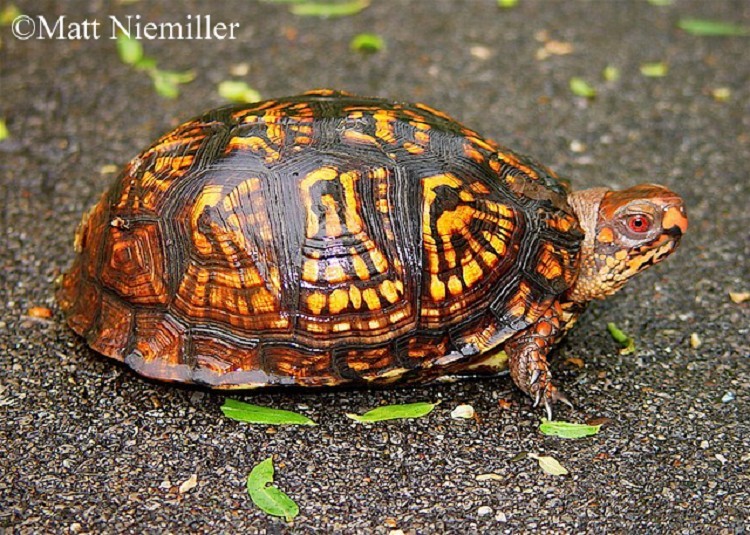