The Hoary Bat is the largest bat species in Tennessee, living primarily in trees. It occurs across the entire state, and is also the most widely distributed bat in the U.S.

Description:
A large bat with long, thick brownish fur, which is distinctively frosted.   The fur is dark brown to black at the base, followed by a broad band of cream color, then a slightly narrower band of mahogany brown, tipped with white giving it a frosted or "hoary" appearance.   Under parts are more yellow, with less frosting.   The upper surface of the tail membrane is heavily furred. It has short, broad, rounded, yellowish ears which are edged in black. This bat also has a distinctive yellowish collar under its chin.

Habitat:
They roost almost entirely in trees 10-15 feet above the ground hanging from their hind feet on branches, covered by leaves above, and generally open beneath.   Most migrate southward in October and November as the temperatures drop and food sources are depleted.

Diet:
Moths make up the majority of their diet.   They also feed on mosquitoes, flies, wasps, dragonflies, and beetles, mainly found over meadows and waterways.

Breeding information:
Breeding occurs in late summer or early fall, but eggs are not shed to the ovaries until spring.   Females deliver 1-4 (usually 2)  young between mid-May and early July.   The young are blind at birth and weigh 0.14 ounce.   They cling to the mother throughout the day, but are left clinging to a twig or leaf while she forages at night. The young can fly at 1 month old.

Status in Tennessee:
Hoary Bats are generally uncommon in all of their range, including Tennessee, but are not listed for protection.

Fun Facts:
•Occasionally, hoary bats have been known to prey on smaller bat species.
•They are rarely seen by humans, as they occur in small numbers and almost never enter man-made structures or caves and are dormant during daylight hours. 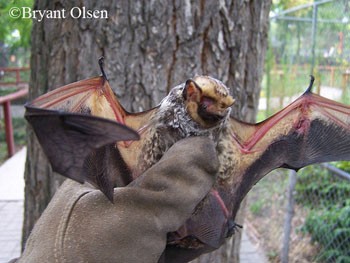