The Eastern Red Bats, which are one of the easier bats to identify due to their reddish color, often emerge in the early evening, and can be seen feeding under street lights. These bats  occur all across Tennessee.

Description: A medium-sized bat with a wide range of reddish coloration and white-tipped hairs giving them a "frosted" look.   Males are generally a brighter red or orangish-red and have less of a frosted look, while females are dull red to chestnut.  Both sexes have a yellowish white patch in front of each shoulder.   The ears are short and rounded.   The tail membrane is thickly furred on the upper surface, but thinly furred on the underneath half nearest the body.

Similar Species: Hoary Bat is larger, more brownish, has a more frosted look, and has a heavily furred tail membrane.

Habitat: Eastern Red Bats are primarily a tree dwelling species, spending time in forests and around shade trees in cities and farms.   Daytime roosts can be the outer canopy of large trees, shrubs, and bushes.   They hibernate in hollow trees or under loose bark; they rarely enter caves or buildings.

Breeding information: Breeding occurs in the fall. Females store the sperm in their body over the winter.   Delayed fertilization in the spring leads to the birth of 1 to 4 young in late May or early June.   The mother bats lick the fur and clean the droppings from their blind and hairless young. The young bats begin to fly at 4-6 weeks.

Status in Tennessee: These bats are common throughout their range, including Tennessee.

Fun Facts:
•Eastern Red Bats usually hang by one or two feet on tree branches, blending in very well with dead leaves.
•Because bats in the Lasiurus genus (hairy-tailed bats) can have up to 4 young, they are the only bats that have 4 nipples.

Best places to see in Tennessee: Hanging on vegetation or flying in early evening. 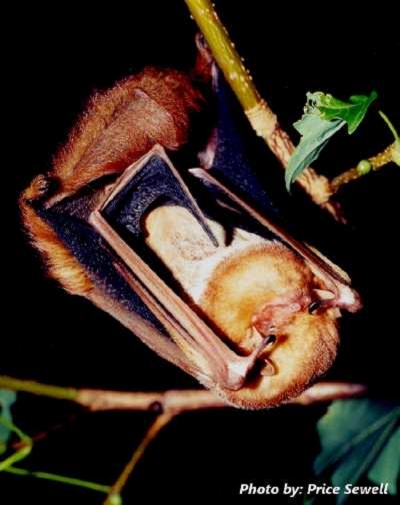