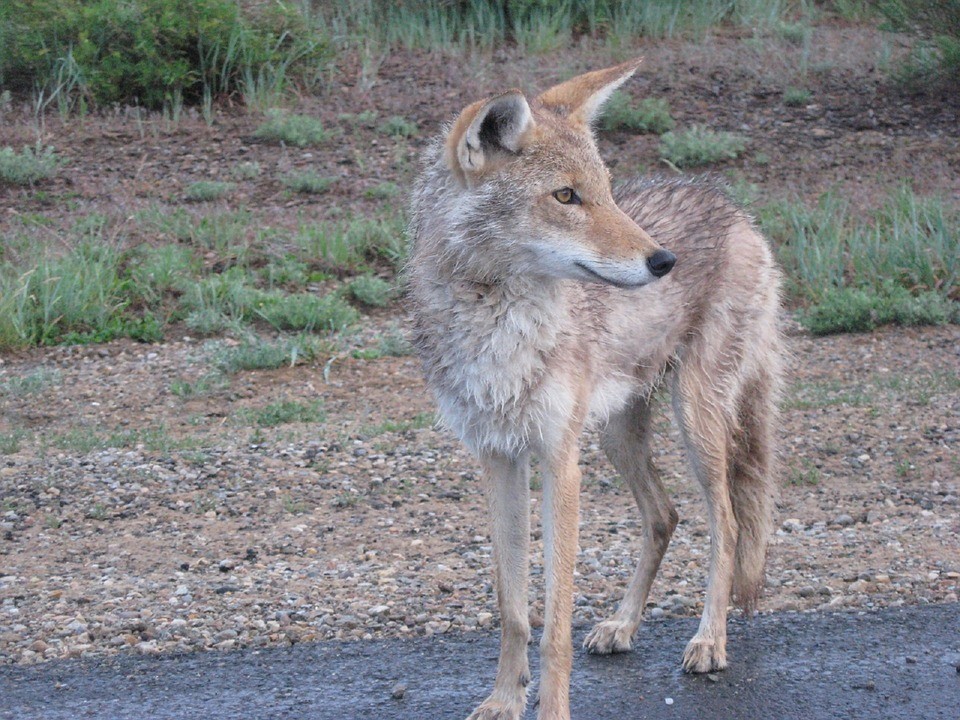 Coyotes are very adaptable, secretive canines that occur in a diversity of habitats all across the state.   They are dog-like in appearance and somewhat resemble a small German Shephard.

Description: A large mammal with an elongated muzzle with a black nose, long legs, and a long, well-furred tail with a black tip that is carried down as it runs.   Ears are erect and triangular-shaped.

The long, thick, heavy, coarse fur is variable, but usually light gray to dull yellow with the outer hairs tipped with black.  The backs of the ears and the outer leg color are typically reddish.

A grey-black band of longer hair (typically five inches long) runs down the mid-back and forms a shoulder saddle or mane.   Throat, belly, and under tail color is white.

The eyes are typically yellow or amber with round black pupils.  Their eyesight is six times greater than men. Sense of smell is extremely well developed, more than 23 times better than men.

Coyotes rely upon their sense of smell for hunting and detecting scent left by other coyotes.  The coyote may run up to 30 mph for short distances. They are good swimmers; however, coyotes are poor climbers

.Coyote tracks are oval in shape and the toenail marks tend to hook inwards.   Dog tracks are more round and have deeper nail marks pointed outward.  As typical with all members of the dog family, the coyote’s front foot is larger than the hindfoot.   The front foot track of the coyote averages 2 ½ inches in length.

Coyote droppings (scats) are quite variable but are typically large, strongly tapered and contain much hair, bones, feathers or seeds.

Similar Species: Red and Gray Foxes are smaller, have longer tails, and have vertical slits for pupils.

Some domestic dog breeds may be very similar to coyotes.

Habitat: Coyotes are found in many different habitats.   They can live almost anywhere including fields, forests, farmlands, shrubland, and urban areas.

Dens are usually located in remote or unused fields, often in a bank, under a hollow log, in a rock cavity, or under a deserted building.

Diet: Small mammals and rabbits compose a majority of their diet, but they eat a variety of other animal foods. Some plant matter, such as fruit, also eaten.

Breeding information:   Breeding usually takes place in February and March when the females are receptive.

Young are born with brownish-gray hair but are blind and helpless.

They begin to open their eyes around 8 days and learn to hunt between 8 and 12 weeks old.   Both adults help care for the young.

Status in Tennessee: Coyotes are locally common due to their adaptability.   They are hunted to control their damage to livestock and poultry and for their fur pelts. 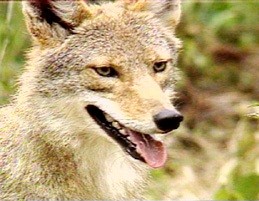 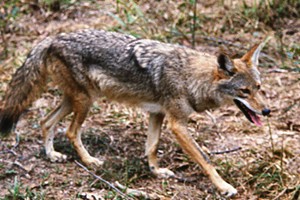 A typical group of coyotes consists of a mating pair and their offspring.   The family unit is largest in the summer when pups, parents, and non-breeding adults are together at dens.

Coyotes may dig their own den or enlarge another animals den. Natural holes, blown down trees or rocky ledges may also be utilized as den locations.

The typical litter size is 5-6 pups born 60-63 days after breeding.  The entire family unit including the mother, father and other family members help raise young by providing food.

The young are weaned after 5-7 weeks.   Young coyotes begin dispersal in October, at which point a young coyote may travel up to 100 miles from its birthplace.

Coyotes are chiefly nocturnal but may be active by day.   Coyotes communicate through a series of yips, barks, and howls.   A common call of the coyote is two short barks and long wavering yodel known as the howl.

They use stumps, posts, bushes or rocks as “scent posts” on which they urinate and defecate, this marks the animal's territory and communicates with other animals.

Adult males have large territories (15-25 square miles) in which they roam; adult females occupy areas of six to ten square miles.   The availability of food affects the territory size of the coyote.   The adaptable coyote may eat almost anything.

They prefer fresh kills but will eat carrion.   The most important foods to the coyote are rodents, rabbits, insects, watermelons, apples, persimmons, muskrats, squirrels, skunks, and domestic fowl.

Coyotes may be hunted year-round in Tennessee. There is no bag limit.