Sturgeons are a group of primitive fish that have several rows of bony plates (called scutes) on their bodies instead of the typical covering of scales.

They also have four barbels (whiskers) in front of their sucker-like mouth on the underside of their rostrum (snout).  These are used to sense the river bottom and to identify food items.

This group of fish contains some of the largest freshwater fish and historically were an important Tennessee commercial species. Of seven sturgeon species that occur in North America, three are found in Tennessee, none of which may be harvested.

Reporting Your Catch is Important for Conservation

Although you cannot specifically fish for lake sturgeon and they must be released if caught, TWRA encourages anglers to report pertinent information from incidental catches, such as time and location of capture, and the length of the lake sturgeon.  This information will help further guide TWRA’s restoration efforts.  Submit your information by either:

1) Filling out and submitting the Lake Sturgeon Angler Report Form

This data will provide important movement and growth information needed to monitor the success of Tennessee’s lake sturgeon reintroduction program. In appreciation for reporting this information, anglers will receive a Lake Sturgeon Certificate.

An inhabitant of large rivers and lakes, the lake sturgeon is one of three native sturgeon species found in Tennessee.   While they were formerly found in the Cumberland, Mississippi, and Tennessee rivers, lake sturgeon populations have dramatically declined and are listed as endangered in Tennessee.   The reasons for the decline over the last century are a combination of over-fishing, habitat loss, and the damming of rivers.   Being a bottom feeder, their diet consists mainly of snails, insect larvae, mollusks and crayfish.

Potentially one of the largest and longest living fish in Tennessee, the lake sturgeon is reported to grow to eight feet in length, weigh up to 300 pounds, and live 150 years. Efforts have been underway to restore reproducing populations of this primitive species to Tennessee waters.    Since 2000, over 220,000 lake sturgeon have been stocked into the Cumberland River and the upper portion of the Tennessee River. 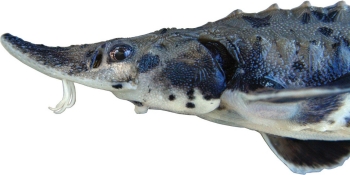 Until 2010, this sturgeon was harvested by commercial fishers for its roe (eggs) in the production of caviar. Shovelnose sturgeon are now a protected species because of their similar appearance to Tennessee’s third sturgeon species, the pallid sturgeon, which is listed as an endangered species.

The pallid sturgeon is an endangered species which cannot be harvested, and is very similar in appearance to the shovelnose sturgeon.   It is found in the Mississippi River in areas with strong current and, like the previous two sturgeons, it is a bottom-dwelling fish preferring a firm, sandy or gravel substrate.

The pallid sturgeon is one of the rarest and largest fishes in Tennessee and alterations of large river systems such as damming, channelization and diking is believed to be the primary cause of their decline.   Pallid sturgeon feed on aquatic insects and small fish, and attain a larger size than shovelnose sturgeon, reaching lengths of over 6 feet and weighing over 70 pounds with a lifespan of over 50 years.   Hybrids between the pallid and shovelnose sturgeon occur in the wild, complicating identification between the two species.