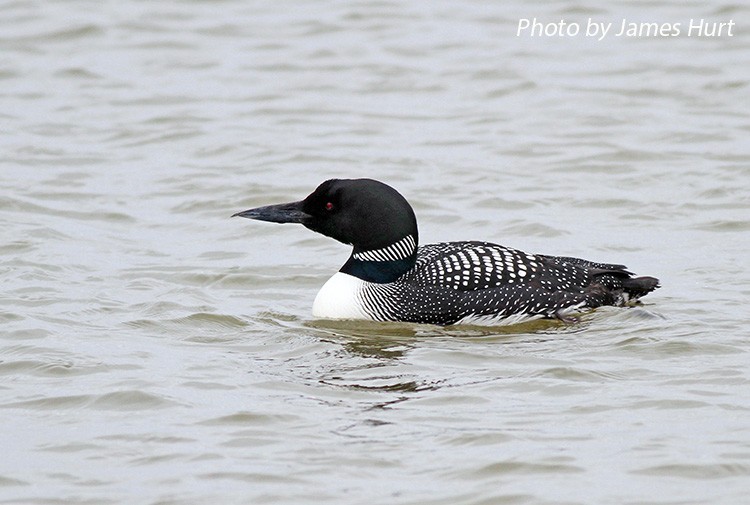 The yodeling call of the Common Loon sounds a bit like wild laughter, giving rise to the expression "crazy as a loon."  In Europe, this species is known as the Great Northern Diver, and it is a superb diver, catching fish as deep as 200 feet!  As graceful as this bird is underwater, it is very clumsy on land because the legs are positioned at the rear of the body.

Four species of loons have been recorded in Tennessee.  The Common Loon is by far the most common.  They can be found on large reservoirs and lakes in Tennessee primarily during spring and fall migration, but many individuals spend the winter in the state.

The breeding range extends across Alaska and Canada, southward to the northern United States, and also in Greenland, Iceland, and rarely in Scotland.  They winter along both coasts and inland on large lakes from Alaska to Newfoundland, and south to southern Mexico.

Description: Both breeding and non-breeding plumaged birds can be seen in Tennessee.  The breeding plumage (March-October) is striking.  The head and neck are black with a white striped collar, and the back is black with an extensive area of white checkering.

The non-breeding plumage (September - March) is gray to gray-brown above, and white below with an irregular border along the white throat and chin.  The bill is black during the breeding season, and silvery-gray for the rest of the year.

Red-throated Loons are a rare migrant and very rare winter resident in Tennessee. They are smaller, and have a more slender bill that is usually held with an upward tilt. The face is paler and the neck has more white.

Habitat: In Tennessee, Common Loons are found primarily on large reservoirs and lakes.

Status in Tennessee: The Common Loon is a common migrant and an uncommon but regular winter resident across the state.  During the fall, birds arrive in early October and reach peak numbers in late October through mid-November.  Spring migrants arrive in late March with peak migration occurring during April.