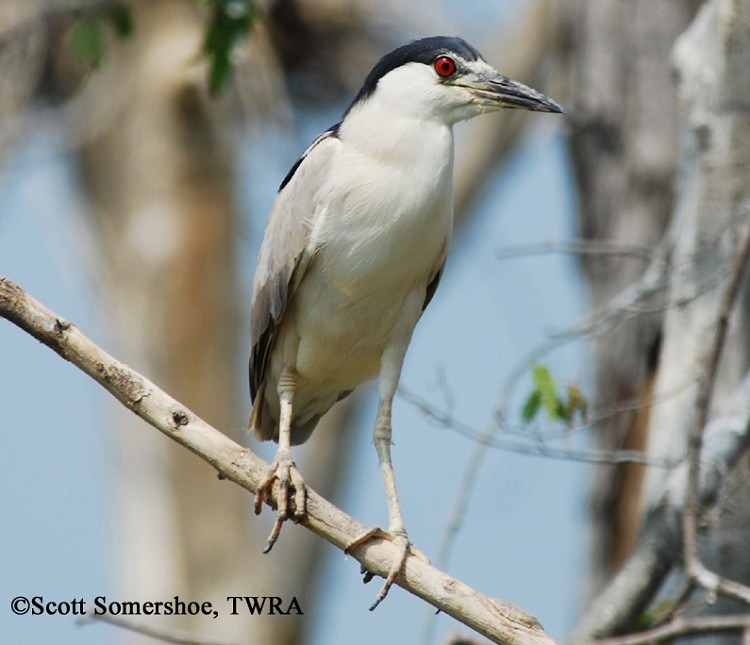 The short neck of the Black-crowned Night-Heron is usually tucked in, giving the bird a stocky appearance.  This heron is not as frequently seen as other herons because, as the name implies, it is most active at dusk and at night, feeding in the same areas that other heron species frequent during the day.

This is the most widespread heron in the world, breeding across most of the United States, including Hawaii, and on every continent except Australia and Antarctica.  In winter, in North America, northern breeding birds migrate to the southern United States and southward.

The Black-crowned Night-Heron is a fairly common nesting species in East and Middle Tennessee, and rare in the West.

Description: This medium-sized, short-necked, stocky heron is black on the top of the head and back, has gray wings, a white belly, and a thick black bill as an adult.

Immature birds (July-January) are brown with white spots on the wings, broad, indistinct streaks on the underparts, and a mostly yellow bill.  Full adult plumage is not acquired until the second spring.

Males and females look similar but the female is slightly smaller.

Habitat: In Tennessee, Black-crowned Night-Herons are found in wooded swamps and around lakes, ponds, and reservoirs.

Nesting and reproduction: Black-crowned Night-Herons typically begin nesting before all other herons except Great Blue Herons, returning to colony sites in late winter.

Incubation: Both parents incubate for 24 to 26 days.

Fledging: Both males and females feed the young regurgitated food. At the age of 4 weeks, the young climb on branches around the nest, and begin to fly at about 5 weeks. The young will follow the adults to foraging areas and beg for food for another few weeks.

Nest: The male brings sticks to the female who builds a platform nest among tree branches. They will frequently refurbish old nests.

In West Tennessee, it nests in colonies with large numbers of other herons and egrets. In Middle and East Tennessee, colonies often contain only Black-crowned Night-Herons. Colonies are usually in wooded swamps or upland woodland within 10 miles of a river or lake.

Best places to see in Tennessee: Not as easily seen as most herons because it is most active at dusk and at night. One regular place to find this bird is on Drakes Creek on Old Hickory Lake.