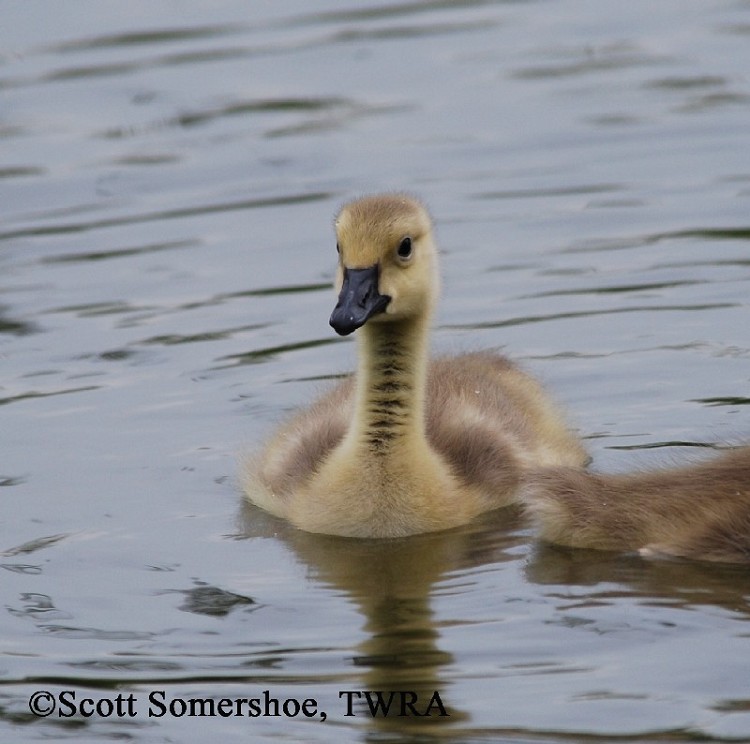 The Canada Goose is the only goose that nests in Tennessee.  It is a year round resident of the state and numbers swell in the winter when resident birds are joined by more northerly nesters.

The range of the Canada Goose extends from central Alaska across Canada southward to the central United States, and it winters where there is open water in the lower 48 states.

The Canada Goose was extirpated from Tennessee in the late 19th century, but starting in 1966 TWRA, later assisted by TVA, successfully established a non-migratory resident population.  This reintroduction was so successful that these geese have become a nuisance in a few parks and golf courses.

Description: Males and females are similar in size and appearance. They can be identified by their black heads and necks marked with a contrasting white “chinstrap.” The back is brown, the chest and belly are pale, and the tail is black with a white rump band.

Voice: The call is a distinct and musical honking. Mated pairs will often honk back and forth in flight.

Incubation: The female alone incubates for 25 to 30 days while the male guards her and the nest.

Fledging: Young leave the nest within 2 days of hatching and will stay with the parents into the winter months.

Nest: The female selects the nest site and builds the nest of grasses and forbs, and lined with body feathers. It is always placed near water, usually on a slightly elevated site with a fairly unobstructed view.

Maximum numbers occur from late November through March, but due to warmer winters fewer Canada Geese winter in Tennessee than in the recent past.

Best places to see in Tennessee: In winter Canada Geese are found on lakes and large ponds in the middle and western parts of the state including Reelfoot Lake, Cross Creeks NWR, Britton Ford, Tennessee NWR, and Old Hickory Lake. During the breeding season they can be found on lakes and ponds statewide.

Identification of Canada and Cackling Geese