Some people mistake the Eastern Newt for two different species because it has a complex life cycle that features two distinct forms. Although adults are aquatic, the species can go through a juvenile terrestrial phase (during this period they are called efts) and be found far from water. Once it reaches adulthood its body adapts to its new watery life by elongating, developing smoother skin, becoming counter-shaded (dark above and light below), and changing from a round to keel-shaped tail.

Description:
In the eft stage, the Eastern Newt's body is blaring orange, bright to dull red or brownish with lighter spots encircled by black. It has small black specks scattered along the sides and back, and dry, granular skin. In the adult form, it is olive green above with regularly spaced orange spots encircled by black on the back and scattered small black specks along the back and sides.

Habitat:
Eastern Newts live in both deciduous and coniferous forests. Immature and larvae and adults live in small bodies of water such as ponds, lakes, ditches, and marshes that have muddy bottoms.

Adults can survive on land if their water habitat dries up.

Breeding information:
Breeding begins in late winter and lasts through early spring. Females produce between 200 and 400 eggs. It takes on average three years for larvae to reach the adult stage.

Status in Tennessee:
Common though population declines have been noted throughout their range, perhaps due to habitat degradation.

Fun Facts:
•The Eastern Newt can locate its home pond using its sense of smell and an internal, light-dependent compass
•Eastern Newts frequently live in ponds with fish because toxic skin secretions afford them a degree of protection 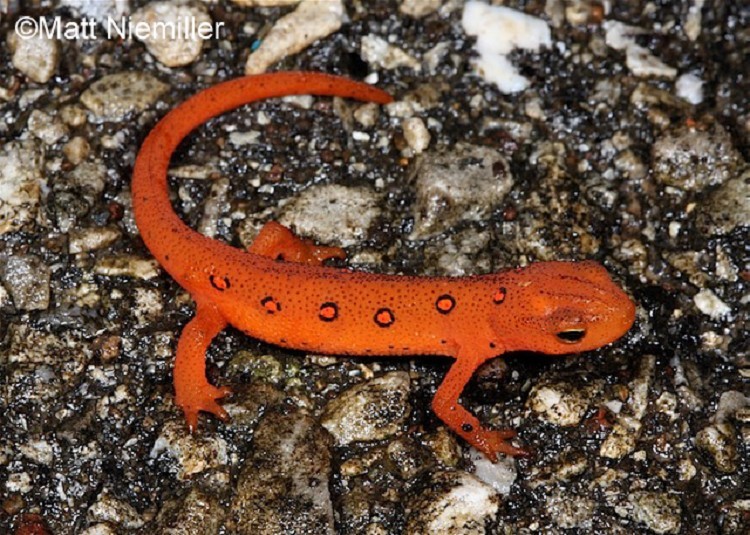