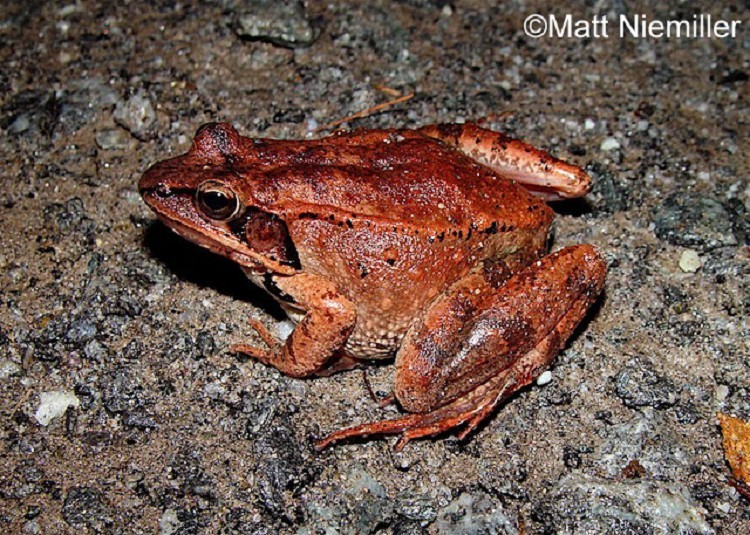 A frog of the eastern and north-central portion of Tennessee, the Wood Frog is one of the earliest breeders, and the first frog to begin calling, often beginning before the ice has completely left its breeding ponds.

Description:
Wood Frogs are typically 1.25 to 3 inches long. They range from brown to pink and are characterized by a dark mask extending from the eye backward across the tympanum.

Breeding information:
Explosive breeders, females lay large globular masses of up to 3,000 eggs and anchor them to submerged vegetation. Wood frogs are communal breeders so many egg masses are often laid at one time. Eggs hatch within 3 weeks. Metamorphosis of tadpoles takes about 2 months, and maturity is reached in 2 to 4 years.

Status in Tennessee:
Common in the appropriate habitat.

Fun Facts:
•Wood Frogs are found as far north as Alaska and are the only frogs found north of the Arctic Circle
•In the winter, as much as 35-45 percent of the Wood Frog's body may freeze, and turn to ice. During this time their breathing, blood flow and heartbeat ceases

Best places to see in Tennessee:
Found in the eastern half of the state in moist woodlands.