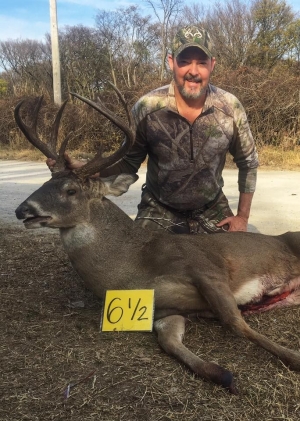 Presidents Island is Tennessee’s most highly sought-after deer bow hunt. The 6,800 acres were opened to hunting in 2000 and quickly became known as a place to harvest a large mature buck in Tennessee. Some of Tennessee’s best deer hunting can be found in southwest Shelby County near Memphis. Presidents Island is owned by the City of Memphis and Shelby County and managed by the Tennessee Wildlife Resources Agency. The unit has a 9-point or better rule, and it’s the hunt of a lifetime in West Tennessee.

How do you get lucky enough to hunt this place? One of two ways, either you win in a quota hunt or new this year, the Tennessee Conservation Raffle has a Presidents Island hunt package as a prize! There are two, three-day quota draw hunts, and these hunts are highly-coveted by hunters across the country. The quota draw is for one 3 day hunt, but if you win the raffle you get to go for both 3-day hunts!

Here is your chance to win an archery hunt of a lifetime hunt through the Tennessee Wildlife Resources Foundation Conservation Raffle. Instead of waiting the 10 years it typically takes to get drawn for a quota hunt, you can purchase raffle tickets for the opportunity to hunt Presidents Island.

The Presidents Island package winner will get the chance to hunt some of Tennessee’s best deer hunting for a large, mature buck that can be found in southwest Shelby County.

The winner will join 30 other bowhunters for a 3-day archery-only hunt for world-class bucks December 4-6, 2020. Also included in the package is lodging in an Oliver Travel Trailer near Presidents Island, a Ravin R26 Crossbow, a Huskemaw Crossfield 3x32 Crossbow Scope, a Hawk Helium Pro Hand-On Stand & Climbing Sticks, and your choice of Lacrosse Hunting Boots.

Make sure you buy tickets for your chance to win an awesome deer hunting package in this year’s TWRF Conservation Raffle.

What is a quota draw hunt? The TWRA realizes that in some areas of Tennessee, the number of hunters needs to be restricted so as not to cause a significant impact on the resource. In these areas, the Agency utilizes a quota hunt system. The system randomly selects a specified number of hunters from a pool of applicants. Tennessee has a priority point system in place for several of its quota hunts, and Presidents Island Unit is a priority hunt. An applicant is awarded one point for each year he/she applies and is unsuccessful up to the maximum for that particular hunt. Quota hunts are easy to apply for and can be completed online, through our Mobile App, or through a TWRA Licensed Agent location. Applications are not accepted by mail. It typically takes 9-11 priority points to get drawn for the hunts. In 2019, 7,581 people applied for the 90 available Presidents Island tags.