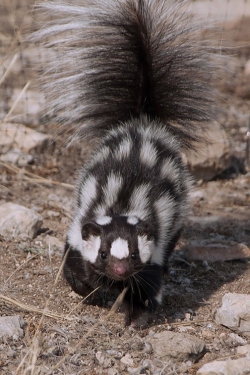 Note: This article originally appeared in the 1997 January-February issue of Tennessee Wildlife magazine.

I vividly remember raccoon hunting with some folks in East Tennessee on a February night when the dogs struck.

“Not much of a race,” said one hunter. “Sounds like he treed something in a hole. Hope it ain’t a dark polecat.”

Unfortunately, that's just what it was. When we caught up with ol' Blacky, the bluetick hound had the distinct odor of Pepe Le Pew- — that lovelorn skunk of cartoon fame.

Although that was not unusual for a coon hunter, most peoples' experience with a skunk's olfactory offering is just a whiff as they speed past roadkill late at night. And for most, that's enough. Everyone is probably well aware of the skunk's notorious reputa­tion. But it is an interesting creature, and this state is blessed with two species--the striped and the spotted skunk.

The two well-developed scent glands in a skunk have nozzle-like ducts which protrude through the anus. The active ingredient in their nauseating musk is the sulfurous compound, butyl mercaptan. With strong hip contractions this oily yellow liquid can be discharged not just once but several times when the animal is frightened or annoyed. The striped skunk can hit you with a water-pistol-like stream from 12 feet away while the spotted skunk can let loose in a similar fashion or with an aerosol mist. Unfortunately, I know all this from experience because my profession has put me in harm's way several times. High concentrations of the spray can make a predator sick and can cause temporary blindness if it hits the eye.

This ability to "stink" is what makes the striped and the spotted skunk distinct from the other members of the weasel tribe but these two species are also quite different from each other.

The larger striped skunk is found all across the 48 contiguous United States and the southern half of Canada. In Tennessee. it is more common in the middle and eastern thirds of the state. Jet black, it is typically characterized by the prominent V-shaped lateral white stripe beginning at the shoulders and continuing down its back. However, I have come across some with just a little white on the head or a blaze on the forehead and others with a beautiful broad, single white band down the spine. The soft wavy underfur is overlain with long, coarse guard hairs, and the bushy seven to 10-inch tail is usually tipped in white.

Most striped skunks are about the size of the ordinary house cat, eight pounds and more than two feet long. Weights can range from three to 12 pounds depending on age, sex. time of year, and physical condition. While the head, eyes, and cars are small, a skunk's rear end is wide; and the legs short and stocky. They walk on their soles like raccoons and bears — the bottoms hairless and their heels touching the ground. Their long and sharp front claws make them adept diggers, and though these familiar mammals are not known for their vocalizations, they do growl, hiss, squeal, coo, and churr. A skunk's senses of sight, smell, and hearing — when compared to other furbearers — have been judged poor to fair; however, like the raccoon their sense of touch is acute.

While trapping for raccoons using a cage trap, I have caught a few striped skunks and luckily, since they are placid and sluggish by nature, they were asleep in the trap. The only thing I could do to release the animal unharmed was to carefully prop open the door and leave. Under no circumstances was I going to encourage him or her to leave. However. if you ever come face to face with a striped skunk don't worry about any sudden moves. They move very deliberately and their slow walk is more a waddle. If one decides to get in a hurry, it is in a clumsy gallop which surprisingly can approach 10 m.p.h.

Striped skunks favor mixed woods, abandoned fields, scrubby areas along fencerows, ravines and rocky outcrops. A commonplace to see them is in picnic areas and campgrounds in national and state parks. It's hard to find a farm that doesn't have a resident skunk someplace.

Normally nocturnal they are also omnivorous, so garbage is an attractant. In the wild, they have a whole smorgas­bord of favorites. In the summer they like insects — adult and larval forms — including grasshoppers, crickets, wasps, Japanese beetles, potato bugs, and tobacco worms. Skunks will dig out bumblebee nests but also will scratch at beehives catching any honeybees that fly out. If you have ever seen small, cone-shaped holes in your lawn, flowerbed, or garden, that is evidence a skunk has been digging for grubs. Most ornamental horticulturalists are not amused by this feeding behavior. Skunks will also make a meal out of spiders, toads, frogs, lizards, snakes, mice, chipmunks, the eggs of turtles, and ground-nesting birds. When fall and winter roll around, they prefer ripe fruits like wild grapes, cherries, and persim­mons. They also like nuts, acorns, buds and grasses and small mammals such as mice, voles, moles, and shrews. They will scavenge even carrion.

Frequently denning in hollow logs, stumps, and trees, under buildings, inside rock piles, and abandoned groundhog burrows, striped skunks will dig a shelter if they can't find a suitable one. They usually have more than one site except during the winter. Their 12- to 15-inch diameter main chamber is lined with leaves and dry grass usually three feet down and connected to the surface with one or more five- to 15- foot tunnels. Dens arc more commonly found on hillsides because they drain better.

February is the month you sec more road kills because that is the breeding season and males travel widely in search of mates. These amorous Lotharios will fight with each other and although they rarely discharge their scent, some do. I've had many a phone call in February from unfortunate homeowners com­plaining about the skirmishing skunks letting loose their "lethal weapons" under the house.

After mating, the female drives off the male. An average litter of five to seven is born about 50-60 days later. Weighing less than an ounce at birth, the kits are blind and hairless, although the pattern of their future black and white coats is evident on the wrinkled, pink skin. They grow quickly. Their scent glands are functional after three weeks, and their eyes open at four. At two months they are weaned and are leaving the nest for nighttime feeding forays. The family usually breaks up in August or September and by November the young are adult size.

Unlike groundhogs, skunks do not hibernate. They do become formant during the coldest part of winter. The body temperature does not drop but they can lose from l 0 to 30 percent of their body weight if they lie dormant for months. Males tend to leave the den earlier than females and are more likely to be seen foraging in the evenings during mild winter spells. Striped skunks are not usually sociable, though as many as 12 may den together — most of which are mothers with their "teenagers."

Now, the spotted skunk follows a different pattern. This fellow is much smaller than its striped cousin weighing only about two to two-and-a-half pounds. Stretched out, a big one could attain about 21 inches in length, including the tail. Their black fur is finer and denser than the striped skunk with four to six white stripes extending along the back and sides which are broken into smaller stripes and spots. There is a triangular sometimes heart­shaped spot on the forehead, and the tail is usually tipped in white. Varia­tions of the patterns are infinite so no two animals look alike.

The species' range does not extend as far north and east as the striped skunk but it does dip way down into Central America. Historically, the spotted skunk has been reported across the state, but in the last 20-25 years, the only reliable reports of this species have consistently come from areas around the Cumberland Plateau and the mountain counties bordering North Carolina.

Much more weasel-like than its cousin, the spotted skunk is quick and fast. In a live trap, they definitely do not act like their sleepy kin. They are quite active, always ready to defend themselves. The ones I have encountered stand on their forefeet and advance toward me, making it extremely difficult to open the trap door without incident. The handstand is a remarkable sight and a warning of misfortune to follow. One ungrateful individual I released cornered me in some bushes and let me know exactly what followed. I was not sprayed directly but was engulfed with a mist of "Eau de Skunk," which is every bit as potent.

The spotted skunk can be found in a variety of brushy, rocky, and wooded habitats. It's not fond of wetlands. I have never seen this animal feeding along the highways in Tennessee; most encounters occur along clear mountain streams with rhododendron and mountain laurel bordering the banks. It is omnivorous, feeding on foods similar to the striped skunk. It breeds in March and April and young are born in May or June after 50-65 days. The TWRA has a special interest in the status and distribution of the spotted skunk. If you know of any in your area —alive or dead — please notify the forbearer biologist in your nearest TWRA regional office so we can better document its geographic distribution.

Since predators like the great homed owl do not have a well-developed sense of smell, skunks may fall prey to them. Dogs, coyotes, foxes, and bobcats occasionally take skunks, but most are discouraged by the potent musk. Some are taken by trappers, but the pelt values are less than other furs. And like other animals, wild and domestic, diseases can also take their toll.

Distemper is common and some striped skunks have been diagnosed with rabies in Tennessee; therefore, it is imperative that you never handle or touch any skunk no matter how "tame" or helplessly injured it may appear. The rabies virus can be transmitted not just from bites of a furious animal but also from the saliva of a recently killed animal is dangerous and can invade the body from small unknown cuts in the skin of the fingers. If you suspect that you might have been exposed to rabies, notify your physician or health department immediately. If you don't do anything and have contracted the disease, the consequences arc always fatal. Never handle skunks, period. And as an extra precaution, vaccinate your pets for rabies too. You never know what critters they may come in contact with.

To some people, the striped and spotted skunk seem appealing enough to keep for a pct. Don't think about it. The TWRA prohibits the taking of native wildlife for pets and there is even a more specific law on the books that prohibits any person from having a pet skunk at all. Neither can you purchase a pedigreed, de-scented, chocolate variety from a legitimate pet dealer out-of-state and have it imported into Tennessee? By law, the TWRA cannot issue any citizen a permit for a pet skunk. Sorry.

Personally, I've always thought skunks were fascinating animals. And although they may have an unpleasant reputation, they do perform beneficial roles in nature by eating many agricul­tural rests. So, the next time you see or smell one, don't panic. Take a little time to observe this intriguing little mammal — from a distance, of course. They are, after all, an invaluable part of our ecosystem. and it just makes sense to keep them around.

Note: Ed Warr was the TWRA’s assistant chief for the Wildlife and Forestry Division at the time of retirement in March 2011. He  served the TWRA for 37 years