The Etiquette of Duck Hunting 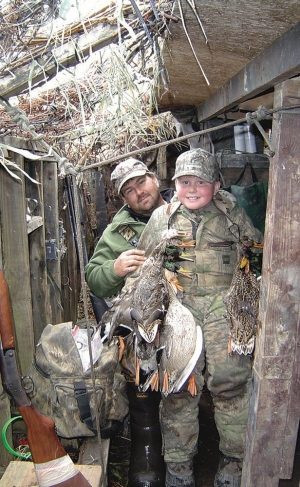 Bob is sitting in his boat blind on the local wildlife management area on opening morning of duck season. He is excited about the prospects of shooting some birds. Mallards would be nice, but woodies, or whatever will do.

Bob has done his homework ... he has scouted over the past few weeks and knows where the ducks have been feeding and loafing. He has chosen his spot after careful consideration and hard work.

The air is cool and crisp and Bob is in his blind one hour be­fore legal shooting time. He has checked the wind and has his blind in the best spot. He has cleaned his gun, practiced his calling, worked his dog, bought a few new decoys to add to his spread, and is sport­ing a new hunting coat.

As the sky starts to turn orange, Bob sits in eager anticipation as he hears duck calls and wings whis­tling overhead.

Roy, on the other hand, is just showing up at the WMA. Roy is running late. He jumps out of his truck and slams the door shut. He runs around to the passenger side, grabs his gun, slams that door shut, launches his jon-boat, and starts out into the bottoms.

After a few minutes, he remem­bers he forgot his calls and ammo and heads back to the truck. A couple more door slams later and Roy is headed back to the swamp.

Roy has not hunted this area before and just didn't have time to get out and scout any. He decides to run until he flushes ducks and see what happens. He doesn't go far before he jumps a couple of wood ducks. Bang! He gets off a shot before the boat even comes off plane. The birds wing away into the sunrise.

He continues on and before long, he sees Bob sitting in his blind along a distant tree line. Does Roy avoid the area where he sees Bob hunting? No. Roy figures Bob is sitting there because it is

a good spot. So Roy motors to within 100 yards of Bob and pro­ceeds to set out decoys-after all, this is a public area and that other guy doesn't own it!

Before long, another pair of ducks wing across the marsh. Bob starts to call and they bank toward his spread of decoys. One more pass and they will be in range. Bang! Roy fires one off, never mind that the ducks were closer to Bob than Roy.

Now, even though Bob was well­prepared, had scouted the area and was there first, Roy thinks it is his right to hunt wherever he wants on this public area-and it is his right. However, poor Bob has to suffer the consequences of Roy's poor man­ners, poor hunting etiquette, and poor behavior. His hunt has been ruined and he has wasted a good portion of his time, money, and ef­fort, thanks to ol' Roy.

Here is another common scenar­io that plays out routinely in areas with more than one blind. Some hunters shoot when the ducks are too far away or when they are being worked by another blind. It usually goes something like this:

"Get down, we got 20 mallards bailing out of the sky.'

"They are making one more swing and are headed in, get your guns ready.'

"What the heck? I can't believe it. Those guys in that next blind shot at the ducks we were working!"

"Yeah, and the ducks were more than 100 yards away from them when they shot. They had no chance to kill 'em but just had to mess it up for us:

This is becoming more and more common each day on public and shared private hunting areas in Tennessee, and across the rest of the country. It is called poor hunting etiquette or just plain bad manners. It is an epidemic across the land and has the potential to drive many hunters out of the sport altogether.

It is not just duck hunting that we are talking about either. This lack of consideration for other sportsmen has become pervasive in all manner of outdoor activities where people are sharing a com­mon resource.

Many waterfowl hunters in Ten­nessee rely on public areas to have a place to hunt. These areas offer hunters an opportunity to hunt waterfowl that they would not otherwise have. However, because these areas are shared, hunters must show respect and consider­ation for each other.

Let's talk about skybusting, sky­blasting, or as I heard one hunter put it, "practicing the art of long­range shooting:' Whatever you call it, skybusting is a terrible habit to get into, not only on public lands but private lands, too.

Skybusting leads to many crip­pled ducks that never get retrieved, which is a travesty in and of itself. It also causes ducks to become shy of duck blinds, decoys, and duck calls. It can change feeding patterns, causing ducks to feed at night. 3½-inch shotguns and 10  gauges have caused hunters to think that they can kill ducks at 60 yards. Maybe you can, but why would you? Where is the satisfac­tion in shooting at a duck that was just passing by? That type of satisfaction may be attained by shooting skeet.

Skybusting behavior can be prevented if a hunter learns how to work ducks. Working ducks is an art and is a difficult skill to master. Practice duck calling more or hunt with someone who can call.

Most of the old-timers will tell you that the satisfaction in duck hunting isn't the killing. It's watch­ing a mallard respond to your call and bail out of the stratosphere to land in the decoys. Be patient enough to work a group of ducks for 15 swings before they decide to come in "feet down.”

There will be times when the ducks leave and you never get a shot. Again, it isn't all about the killing is it? It is called "duck hunting” not “duck shooting.”

Skybusting is a blight on most of the public waters of our great state. Help eradicate it by observing good duck hunting etiquette.

Never shoot at swinging ducks that are being worked by another duck blind. This is an extremely poor and despicable action.

If you want to have a successful hunt, get to the site earlier, brush your blind better, put out more decoys, and learn to call better.

It is also ill-mannered to try to call ducks off another blind. Only call ducks that are swinging over close to your blind.

While on the subject of calling ducks, have you ever been invited to hunt with another person in his or her blind? Most of us have, and most of us know that you never pull out your duck calls and start calling in someone else's blind un­less you have been invited to call. You may think you sound great but ducks respond differently to dif­ferent calls in different areas under different kinds of conditions.

When I was in college, I invited a buddy to come home and duck hunt with me and my dad. The first morning in the blind, he started blowing his duck call every time a group of birds would come by.

After about an hour of this, my dad asked to see his duck call. He opened it up, took out the reed, put the reed in his pocket and handed the call back to my buddy. He never said another word and my buddy didn't call anymore.

I was allowed to call because Dad, Granddaddy, and my uncle taught me how to call. They not only taught me about the physical act of calling but they also taught me when to call, when not to call, and what calls to use. Many people can call ducks, but there is an art to working a duck.

Don't pass your poor hunting manners on to your dog. Hunt­ing with a well-trained retriever is a blessing and a source of great enjoyment. Hunting with an ill­behaved, poorly-trained dog can be the cause of great indigestion and bouts of cursing.

If you are invited to hunt with someone else, always ask if it is okay to bring your dog. If you show up with yours and it is not needed, you may be leaving it in the truck.

Do your homework and train your dog. Your dog does not have to be field-trial ready to take hunt­ing. However, some basic com­mands to sit, stay, and be quiet are all that are usually necessary to keep your dog in line and keep the hunt enjoyable for others.

Duck hunting is often a group activity and is inherently dangerous due to multiple guns shooting in multiple directions. Being safe in the blind is critical and being careless is not acceptable.

Always have your safety on, until the moment before you shoot. Guns can easily be knocked over in duck blinds by dogs, kids, and adults. Don't let a good time become a tragedy.

Always watch your muzzle and only shoot in your lane of fire.

Do not shoot next to someone's head. Many hunters have perma­nent hearing loss from having their "ears rung.”

Never shoot at a crippled duck when a person or dog is out of the blind trying to retrieve it. Even if you think you have a clean shot, let the dog or whoever is out of the blind finish the retrieve. Many a duck dog and duck hunter have been shot by mistake. Also, remember that when shooting at a cripple, it is considered bad man­ners to shoot someone's decoys.

Practice good hunting tech­nique. Ducks have much better eye­sight than humans. They are adept at seeing movement and color.

Many a waterfowl biologist has flown over a duck blind and will tell you that two things usually stand out: a poorly camouflaged duck blind and the face of a hunter.

A poorly camouflaged blind will reduce your hunting success. When you think you have your blind brushed good enough, add that much more brush to it.

From the air, a hunter's face looks like a white, pie plate. Wear­ing a facemask or face paint will help keep you invisible to ducks. If you prefer to just wear a hat, then make sure you use the bill to hide your face and don't look up. Dad had an old saying, "You can either look at ducks or shoot ducks, you can't do both.'

Finally, avoid movement. Hold still when ducks are working. Just stand still and listen to the callers as they do their thing. They will tell you where the ducks are com­ing from and when to get ready to shoot.

Some final points to consider:

•          and-to repeat this one impor­tant safety consideration-do not click your safety off until you have raised your gun to shoot.

Always remember that duck hunting is a social sport-one to be enjoyed by a group of friends and family. Practicing good hunting etiquette is essential to a good hunt. Don't be unsafe, have a well­mannered dog, take good shots, respect other hunters, and respect the resource. These are the keys to being a good hunter and being someone that others enjoy being afield with.

As my dear Mama would say, "Have good manners.”

Tim White is a Wildlife Biologist with the TWRA. He received his B.S. and M.S. degrees from Tennes­see Tech University and has been an avid waterfowl hunter for more than 40 years.