Submission of a tooth from harvested bears is now mandatory.  Learn More. The following bear hunt zones (BHZ’s) are open for a bear dog training season during daylight hours only. No bears may be taken or attempted to be taken and no bait may be utilized. (Bear reserves closed to dog training):

For the purpose of these hunting regulations and better wildlife management, the State of Tennessee is hereby divided into five (5) bear hunt zones (BHZ’s) as follows: 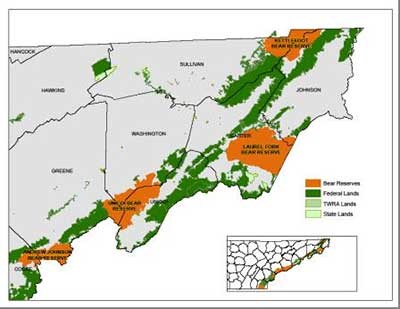 The Cherokee Wildlife Management Area and private inholdings lying southwest of Hwy. 70 east of Hwy. 107 and north of Hwy's. 25-70.

The Cherokee Wildlife Management Area lying west of U.S. Hwy. 23, and the Devils Fork Road, north of the Tennessee/North Carolina state line, east of the Horse Creek Road to Hwy. 107 and south of Hwy. 107 to Erwin. 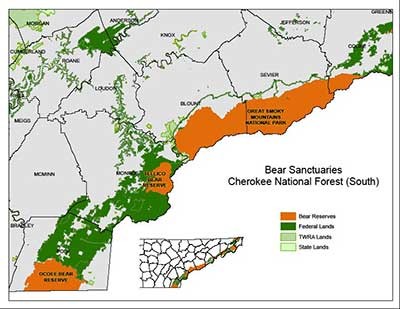 The Cherokee Wildlife Management Area and private inhodings bounded on the north by the Ocoee Lake and Ocoee River, on the south by the Tennessee/Georgia state line and on the east and west by the National Forest Boundary.

One bear either sex. Does not count toward the statewide bag limit. Electronic check permitted.