Note: Participation in this review is voluntary, non-compensable, and will not prevent you from submitting a bid for the project.  Anything you choose to share will remain in confidence.  Any Contractor that is prequalified with TDOT's Construction Division may request participation by completing and submitting a Letter of Interest to Shawna Smith at Shawna.B.Smith@tn.gov. 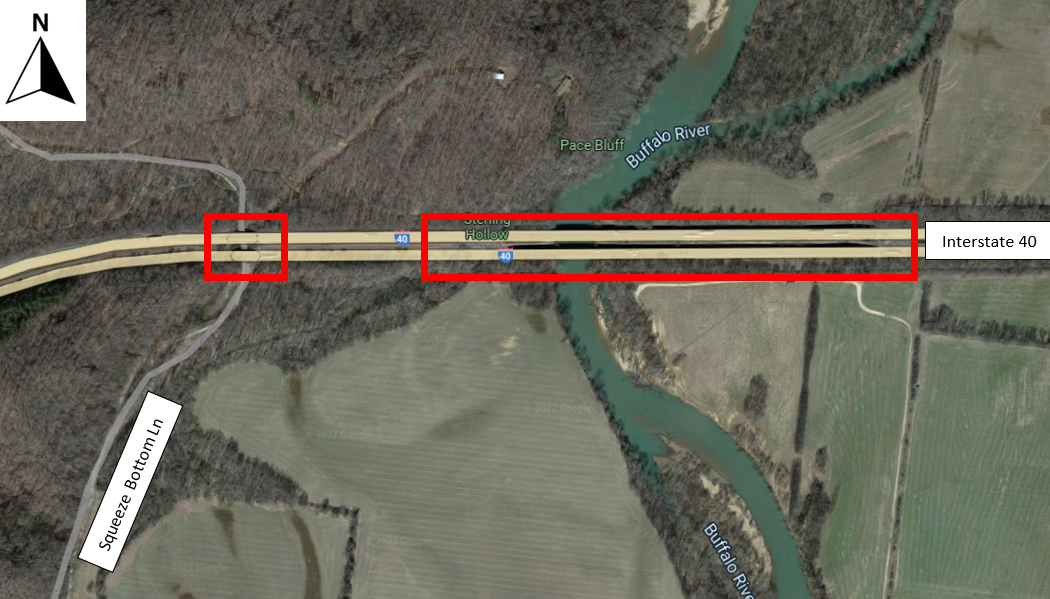 This project includes the replacement of the bridges along I-40 over the Buffalo River and the bridges over nearby Squeeze Bottom Lane.  To enable phased construction and traffic control for two lanes of traffic with shoulders throughout the duration of the project, the interstate approaches to the west, east, and between bridges are also being modified and widened to the median.  Plans include three phases of construction.  The proposed final section will include a concrete median barrier.

The existing, parallel bridges over the Buffalo River are made up of 42 spans for a total length of 1765 feet.  Three of those spans consist of continuous, steel girders with the remainder of the spans utilizing concrete beams.

Original Design plans are dated 1958.  Plans dated 1983 show the widening details that include a single, prestressed box beam added to the outside of each span of both bridges.

The substructures include multi-column bents founded on drilled shafts.  Both abutments are supported on steel H piles.

The existing three-span bridges over Squeeze Bottom Lane are 115’-6” long.  The superstructure consists of haunched, concrete T-beams.  Each bridge is supported by three-column bents and stub abutments.

The proposed structure over Squeeze Bottom Lane is a single-span bridge.  The overall width of the bridge is 121’-3” and utilizes prestressed concrete beams over a total bridge length of 125’-6”.