The Structures Inventory and Appraisal (SI&A) Office is primarily concerned with the safety and condition of the highway bridges in Tennessee. Because Tennessee has over 19,000 bridges, this is a difficult but necessary responsibility. The SI&A Office maintains a complete computer inventory of all of these bridges, which is updated every two years as new inspection data becomes available. The actual bridge inspections are conducted by a number of inspection teams located throughout the state. These teams not only inspect the 8,000+ bridges which are directly maintained by TDOT, but also the 11,000+ bridges which are maintained by county or city governments. The only bridges not inspected are those maintained by the Federal government, such as National Park bridges or those which have been identified as private bridges. All resulting inspection information is transferred to the SI&A central office, which is located in Nashville and saved to an electronic document management system. Inspection information typically consists of inspection photographs, detailed inspection forms, highway clearances, and engineering sketches of problem areas. If the bridge is owned by a county or city government, copies of the inspection reports are also provided to the appropriate local officials.

Bridge information is used in many ways by the SI&A Office and by other offices within state government. For example, the information is used to plan bridge replacement and repair activities at the state level, and also submitted annually to the Federal Highway Administration (FHWA) to help allocate national highway funding. The information may be used to post weight restrictions and, if necessary, close bridges which have deteriorated or have been damaged by traffic collisions or other causes. The SI&A Office maintains a staff of civil engineers and experienced bridge evaluators who constantly review fresh bridge inspection information. Using this information, they perform structural calculations to determine the strength of the bridge, which is updated in the central computer inventory. For information concerning repair procedures, select the Bridge Inspection and Repair page from the Structures Division menu. 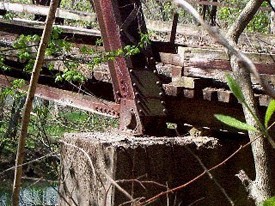 The SI&A Office also works with engineering consulting firms to conduct underwater inspections, using trained divers in deep water, and scour inspections. Shallow water bridge inspections are performed by state inspection teams using sounding rods and underwater cameras. Scour is the process whereby flowing water undermines the supporting soil of bridge foundations. This is a primary cause of bridge failures, especially in West Tennessee where soil conditions favor the formation of this type of problem. For more information on bridge scour, select the Hydraulic Design page from the Structure Division menu.

The SI&A Office also works with the vehicle permit office to route overweight and oversized commercial vehicles, such as very large trucks, through the state. These trucks often carry heavy factory or earth moving equipment that cannot be moved by other means; however, these vehicles, if unregulated, would possibly damage bridges either due to their weight or through bridge collisions. Using the inspection information, the SI&A Office can route these vehicles safely. TDOT uses a software system to issue these permits in a manner that is fast and efficient, but still works to protect the bridge infrastructure of Tennessee from damage.