What is a Truss Bridge? 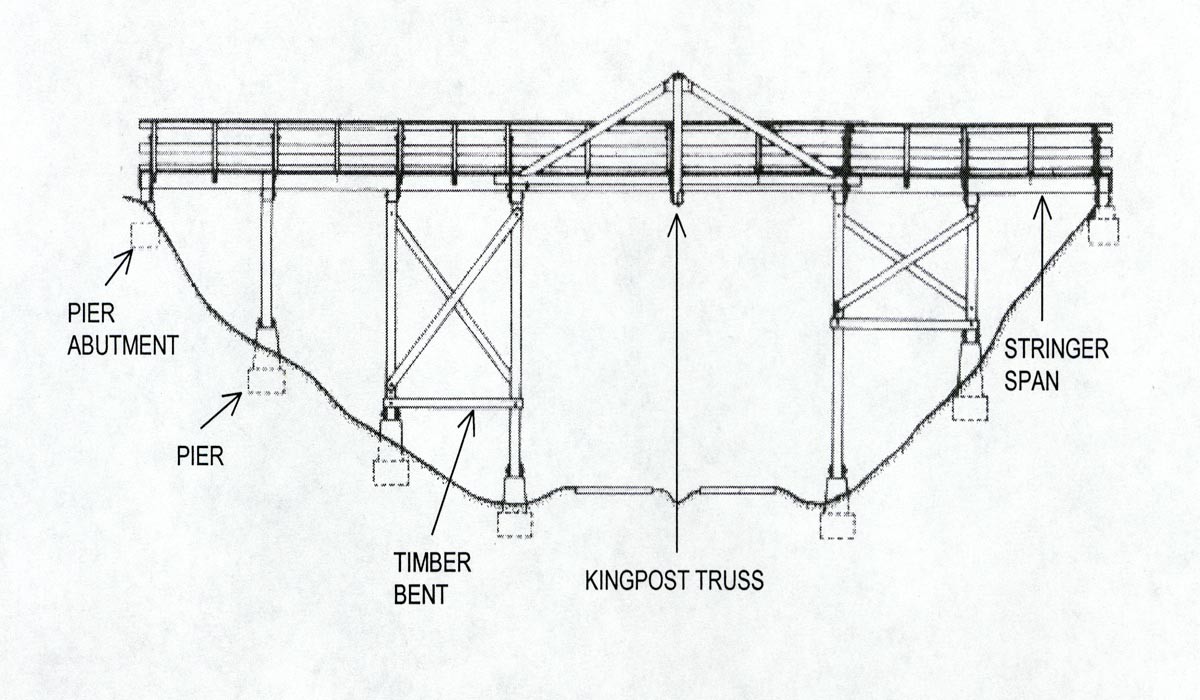 One bridge historian describes a truss bridge in this manner: "A truss is simply an interconnected framework of beams that holds something up. The beams are usually arranged in a repeated triangular pattern, since a triangle cannot be distorted by stress. In a truss bridge, two long - usually straight members known as chords - form the top and bottom; they are connected by a web of vertical posts and diagonals. The bridge is supported at the ends by abutments and sometimes in the middle by piers. A properly designed and built truss will distribute stresses throughout its structure, allowing the bridge to safely support its own weight, the weight of vehicles crossing it, and wind loads. The truss does not support the roadway from above, like a suspension bridge, or from below, like an arch bridge; rather, it makes the roadway stiffer and stronger, helping it hold together against the various loads it encounters." (Eric DeLony, The Golden Age, Invention and Technology, 1994).

The pattern formed by the members combined with the stress distribution (tension and compression) creates a specific truss type, such as a Warren or Pratt. Most truss types bear the name of the person(s) who developed the pattern, such as the Pratt truss that is named for Caleb and Thomas Pratt who patented it in 1844. For instance, the configuration or pattern of a Pratt and Howe truss appears identical (a series of rectangles with X's), but a Howe's diagonals are in compression and the verticals in tension. In a Pratt, the reverse is true.

In theory, a truss bridge contained no redundant members. Builders considered each member or element essential to the functioning of the truss, although some were more important than others were. While most trusses could sustain considerable damage and lose the support of some members without collapsing, severe traffic damage to a member could result in the collapse of the bridge.

Kingpost
Builders first developed the Kingpost as the most basic and earliest truss type. The outline consisted of two diagonals in compression and a bottom chord in tension that together formed a triangular shape. A vertical tension rod (called a Kingpost and thus the origin of the truss name) divided the triangle in half. After the mid-19th century, builders used metal (not wood) for tension rods. Builders typically used the Kingpost truss for shorter spans, up to about 35 feet.

Queenpost
The Queenpost, another early and basic truss type, is a variation of the Kingpost truss. A Queenpost truss contains two vertical members (rather than the one in a Kingpost). These vertical members require the use of a top chord to connect them. This arrangement forms a three panel span in which the center rectangular area may or may not have crossed diagonals. Again, the outer members act in compression and the vertical rods (wood or metal) act in tension. This truss type can support spans up to about 70 feet.

Howe Truss
William Howe patented the Howe truss in 1840. End diagonals connect the top and bottom chords, and all wood members act in compression. Each panel has a diagonal timber compression member and a vertical metal tension member, a material that conducts tensile forces better than wood. The metal tension member eliminated a heavy wooden member and reduced the dead load weight, and builders could more easily join the screw and nut connections between iron and wood than between wood members. Builders could use multiple panels to increase the length of the bridge, typically ranging between 100 and 150 feet.