A highway bridge is defined by the National Bridge Inspection Standards as a public, vehicular structure, more than 20 feet in length, that spans an obstruction or depression. There are 19,915 structures in the State of Tennessee that meet the definition of a highway bridge. This number does not include the approximately 400 bridges owned and operated by Federal agencies.

Bridges are classified in accordance with the Pavement and Bridge Condition Performance Measure established by the Federal Highway Administration. Bridge condition is determined by the lowest rating of National Bridge Inventory (NBI) condition rating for specific bridge components, including:

*As of January 2017, classification for the National Bridge Inventory rating system has changed, including references to “structurally deficient” or “functionally obsolete” bridges, in accordance with the Federal Highway Administration’s Pavement and Bridge Condition Performance Measures final rule.

Beginning with 2018 archive data, the term “structurally deficient” is defined as a classification given to a bridge which has any component in Poor (P) or worse condition. The term “functionally obsolete” is no longer being used.

On- and Off-System Bridges

Off-System bridges are those found on roads owned, maintained, and operated by local governments, including counties, cities, and townships. There are currently 11,495 Off-System bridges, of which 605 (5.3 %) are considered Poor.
Looking at the entire population of highway bridges (irrespective of ownership), about 4.2 % of Tennessee highway bridges are currently classified as Poor.

The average age of all Tennessee highway bridges is 44 years old. This is in line with the national average, which is also 44 years old, based upon a 2018 analysis of National Bridge Inventory data.
Bridges on the state highway system (On-System) tend to be larger and slightly older than those on local highways. The average age of an On-System bridge is 46 years old, compared with 42 years old for the average Off-System bridge.

TDOT, in cooperation with local governments, has worked to steadily improve the condition of state’s highway bridges over the last 20 to 30 years. In particular, there has been a focus at reducing the number of Structurally Deficient bridges. (see graph below) 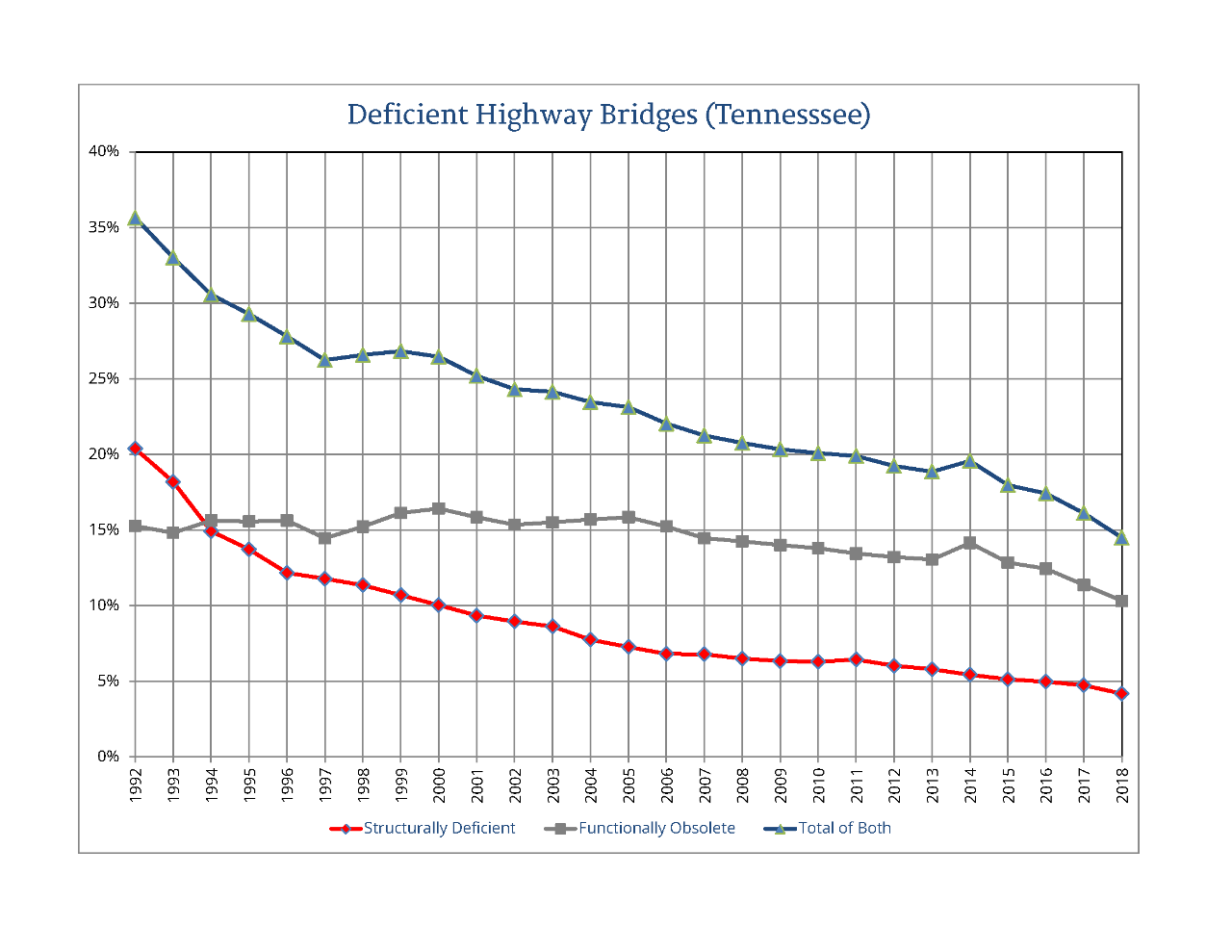 Note that the percentage of Structurally Deficient highway bridges has been reduced from about 20% in 1992 to less than 5% in 2018. This is a significant reduction achieved over the referenced 25-year period.

Even more impressive is that this improvement in overall highway bridge condition has been achieved on a “Pay-As-You-Go” basis, without building up long-term debt for Tennessee taxpayers.

Highway bridges are typically financed by a mix of federal, state, and local funding, depending upon the specific nature of the project and the ownership of the bridge.

Historically, federal funding is provided by the federal gas tax, as distributed by various federal highway bills. The federal gas tax has not been raised since 1993, creating an outdated funding source eroded by inflation and the introduction of more fuel-efficient vehicles. The Consumer Price Index (CPI) indicates that $100 of funding, in 1993 dollars, only has the buying power of $56.74 in 2019 dollars. This actually underestimates the effect of inflation, since highway bridge construction costs have increased faster than the overall inflation rate.

In July 2012, the enactment of a federal law, known as Moving Ahead for Progress in the 21st Century (MAP-21), marked the end of highway bridge programs for Tennessee and other states. Under MAP-21, bridges must compete with other transportation funding needs, and states are required to meet maintenance standards set under a new system of performance measures.

In an effort to continue to provide the best bridges in the nation and support improvements to the state’s highway infrastructure, Tennessee has supplemented federal bridge funds with state funds. In April 2017, the Tennessee General Assembly passed the IMPROVE Act -- Improving Manufacturing, Public Roads and Opportunities for a Vibrant Economy. The bill, which raised the state fuel tax, is a user-based approach that provides critical funding for the state’s transportation network, including bridges. For FY 2017-18, IMPROVE Act funding allowed TDOT to allocate approximately $41 million for repairs to bridges on the state highway system, with an additional $9.5 million allocated for the State Aid Bridge Grant Program to assist local bridge owners with replacement and rehabilitation projects.