Description: A small, keel-scaled snake (8.0 to 10.0 inches in length) with a plain reddish belly.

Body color is highly variable but is usually gray or reddish-brown (rarely black) with or without 4 narrow, dark stripes or a broad, light mid-dorsal stripe.   The belly is usually red but can be yellow, orange, or pink.   The head is usually darker than the body.

Young are darker overall with a more distinctive neck collar.

Similar Species: DeKay’s Brownsnake has a yellowish, tan, or pinkish belly with very small black dots on the sides.  Copper-bellied Watersnake and Red-bellied Mudsnake are much larger and their red bellies are not plain.

Habitat: Found under leaf litter, rotten logs, bark, and rocks in moist hardwood or mixed pine-hardwood forests and other moist sites such as bottomland habitat.   Red-bellied Snakes can also be found around human habitations such as vacant lots where they hide under boards, trash, and other debris.

Breeding information: Courtship and mating take place in the spring and early summer, occasionally in summer or fall. Females give birth to a live litter (ovoviviparous) of 1-21 (average 7 or 8) young during late summer or early autumn. Research has shown that Red-bellied Snakes are very successful breeders.

Status in Tennessee: Locally common in some areas, but uncommon or absent in others; not protected by any state or federal laws. 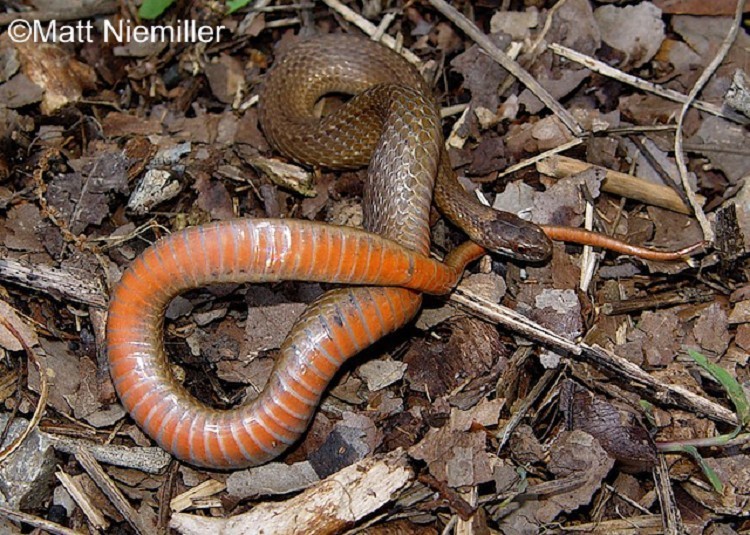